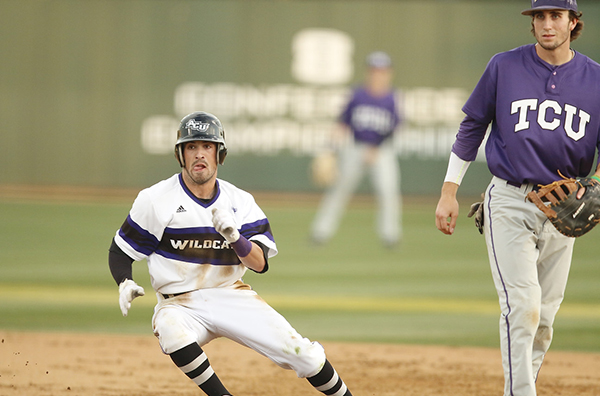 The Abilene Christian University baseball team is 6-9 in the Southland Conference as it prepares to host Sam Houston State University this weekend at Crutcher Scott Field. That’s the same Bearkat squad that traveled to Austin earlier this week and shutout The University of Texas, 5-0.
But don’t let the Wildcats’ overall record (8-26) fool you. If they keep slinging, they will land a stone on the forehead of one of the Goliaths on its schedule before long.
ACU has played Top 20 opponents four times this season, losing all four by one run late in games with the Big 12 and Southeastern conference powerhouses:

The lineup of formidable opponents continues when head coach Britt Bonneau’s team plays Texas Tech again on April 21 (in Midland); TCU in Fort Worth on May 12; No. 5-ranked Arizona State University on May 19 in Tempe; and University of Arizona on May 21-22 in Tucson. The season ends in Tucson with a game against the University of Hawaii on May 23.