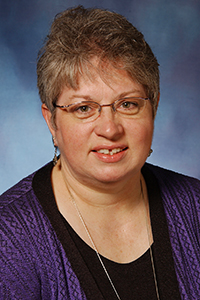 Abilene Christian University staff member Karen Leigh (Wood ’06) Griffith, 62, died April 12, 2015, in Abilene. A memorial service will be held Thursday, April 16, at Woodlawn Church of Christ (3185 N. 10th St., 79603) at 10 a.m., with burial following in Hamby Cemetery. Visitation is today at Elliott-Hamil Funeral Home (5701 Highway 277 S., 79602) from 5-7 p.m.
Griffith was born Oct. 11, 1952, in Dallas and graduated from Abilene High School in 1971. She earned an Associate of Applied Science degree from Texas State Technical College in 1997 and a Bachelor of Applied Studies degree from ACU in 2006. While a student at TSTC, she served as Student Association vice president at the Abilene campus and president at the Sweetwater campus.
She was a longtime champion volunteer at Woodlawn Church of Christ, where she served as children’s minister and mentored countless people. Griffith began work at ACU in 1997 as a records specialist in the Registrar’s Office and was student services specialist in the Depot at the time of her passing. One highlight of her 17-year career on the Hill was being named ACU’s Outstanding Staff Member of the Year in 2001 for her devotion to customer service and to the Abilene Christian students who admired her personal and professional care for them.
She was preceded in death by her father, Glynn Wood. Among survivors are her mother, Olivia; a daughter, Kristi (Griffith) Bearden; a son, Zachary Griffith (’07); a brother, Roger Wood (’76); sisters Kathy Cooke (’78) and Lisa Ortiz; and a grandson.