Home/ ACU News/ Alumni News/ Masters degree: Purple and White see green
Main Content
Features Academic News Alumni News Campus News ACU Online All Categories
Academic News ACU News ACU Online ACU Remembers Alumni News Campus News Faculty Spotlights Features Graduate Programs Research Sports Student Experience Student Spotlights Student Success Undergraduate Programs Why ACU?
Unless you’re a children’s show dinosaur or Gotham’s Joker – and that surely eliminates a sizable chunk of you – purple and green aren’t much of a match.
But through the years, Abilene Christian University’s primary color has interwoven significantly with the trademark tint of the Masters Tournament, the 79th edition of which is being played this weekend at famed Augusta National Golf Club in Augusta, Ga.
Begin with Byron Nelson, perhaps not golf’s all-time greatest player but certainly the author of two of the game’s most hallowed records: 11 straight wins and 18 victories overall in his sublime season of 1945. Eight years earlier, Nelson was an up-and-coming touring pro from a Church of Christ family in Fort Worth when he claimed the fourth-ever Masters. Just 25 years old at the time – the same age as this year’s favorite Rory McIlroy – it was at that point his most important victory. He took the tournament again in 1942, winning an 18-hole playoff against Ben Hogan. In a statistically absurd twist of fate, both men had risen from the same caddyshack at Glen Garden Country Club in Fort Worth and would go on to hall of fame careers.
Nelson retired to his ranch in Roanoke, Texas, after the 1946 season. In addition to tending to his cattle, he devoted his post-playing days to a variety of philanthropic and non-profit activities, including serving as a member of the ACU Board of Trustees from 1965-74 and establishing an endowment in 1984 that made golf a scholarship sport at ACU.
During Nelson’s tenure as an ACU trustee, 33-year-old Abilenian Charles Coody opened the 1971 Masters with a 66 and rallied with two late birdies to overtake young hotshot Johnny Miller and hold off a hard-charging past champion Jack Nicklaus to win by two strokes. A decade later, Coody’s daughter, Caryn (Coody ’85) Hill, transferred to ACU where she met her husband, James Hill (’83).
Abilene Christian also has a history behind the scenes at the Masters and, in fact, in creating those scenes so many have witnessed through the years. In 1977, ACU senior Lance Barrow (’77) worked his first Masters as part of the CBS Sports production crew. Nearly 40 years later, Lance Barrow (’77) is in charge of those telecasts as CBS Sports’ coordinating producer of both golf and NFL games on the network, which every three years includes the Super Bowl. In fact, in the now 60 years that CBS Sports has televised the Masters, Barrow is one of only two men to have ever produced the tournament’s telecasts. The other is Frank Chirkinian, a sports television pioneer and the man under whom Barrow learned the trade.
Golf fans will remember the 1996 Masters as the year three-time champion Nick Faldo reeled in a Shark. The so-nicknamed Greg Norman held a six-shot lead going into the final round in search of his first green jacket, only to shoot 78 and lose to Faldo by five. History may not recall that was also the first Masters covered by a pair of ACU journalism graduates: Doug Ferguson (’83), born on the Friday of the first of Jack Nicklaus’ six wins in Augusta, and yours truly (’91).
Two years later, Ferguson, like Barrow, reached the pinnacle of his particular profession when he became the chief golf scribe for The Associated Press. “AP Golf Writer” sounds way too generic and understated for the significance of the position. Because of how far that news service reaches, Ferguson is generally considered the most widely read golf writer in the world. And one of its best. Repeatedly honored for his work, including receiving the Gutenberg Award from ACU in 1999, Ferguson was president of the Golf Writers Association of America from 2007-09.
The Masters that may have had the deepest shade of ACU purple was 2009. Four-time winner Tiger Woods, No. 1 in the official world golf rankings at the time, was grouped the first two days that year with Jeev Milkha Singh (’96), who won an individual and team national championship for the Wildcats in 1993. That was Singh’s third and – to date – last appearance at Augusta National. He remains the only ACU player to have competed in a Masters.
By that Sunday, the spotlight had shifted to two men with roots in the Restoration Movement and an entertaining Angel. Kenny Perry, a deacon at the Franklin Church of Christ in Franklin, Ky., bogeyed his final two holes to fall into a playoff with 2007 U.S. Open champion Angel Cabrera and Chad Campbell, the younger brother of then-ACU golf coach Mike Campbell (’91). With a couple of good bounces and great shots, the effervescent Argentine Cabrera won the playoff. But as Campbell contended, Barrow directed the CBS cameras toward Mike. From the 18th tower, announcer Jim Nantz repeatedly mentioned Mike and ACU with an estimated 42 million viewers watching nationwide.
This week is my 10th Masters to cover and sixth straight as part of the CBS broadcast team. I will again anchor coverage of Amen Corner, the iconic stretch of holes 11-13, Thursday through Sunday for Masters.com, CBSSports.com and DIRECTV.
My dream scenario for ACU has been for a former Wildcat to win the Masters, Barrow to produce the telecast, Ferguson to write the worldwide recap of record and me to call the winning putt. So far, it hasn’t been in the cards, and, sure, the deck is stacked against a player from the Purple and White ever winning a green jacket. But when it comes to cards and decks, just remember: sometimes Jokers are wild. 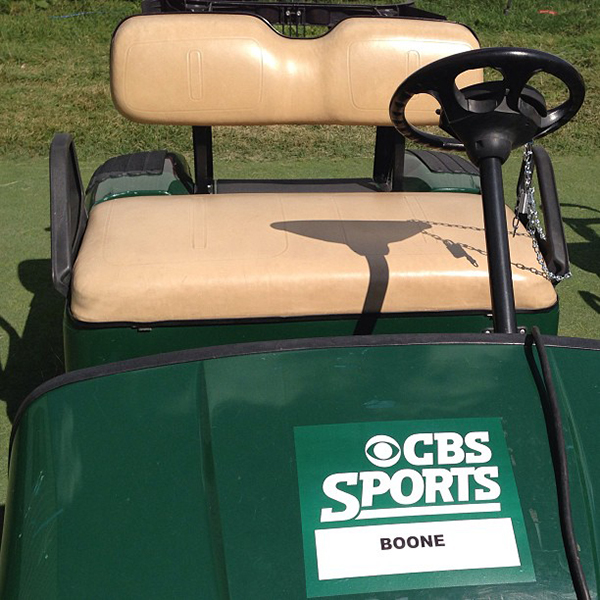