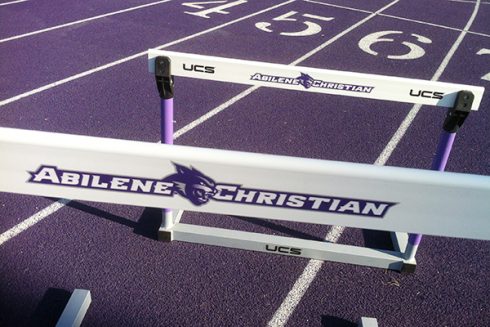 With the crack of a starter pistol, a ceremonial first lap at Abilene Christian University’s new Elmer Gray Stadium will be covered by some of those who made the old stadium of that name legendary in the annals of track and field.
Olympic relay gold medalist Earl Young (’62) will take the baton and break the tape about noon this Friday, April 10, officially opening the new stadium, which along with serving ACU’s legendary track and field program, will be the first permanent home for the much newer – though still quite successful – women’s soccer team.
The grand opening is scheduled to begin at 11:45 a.m., shortly after ACU’s daily Chapel assembly dismisses. It’s the first in a series of events that will culminate with the second annual Wes Kittley Invitational, a track and field meet on Saturday featuring teams from ACU, Texas Tech and TCU, among others. A special induction ceremony for the ACU Sports Hall of Fame will take place Friday night, honoring five Wildcat track and field stars.
Friday’s grand opening will provide students and visitors a chance to run a lap on the new purple track surface, as well as try out their kicking prowess against ACU soccer goalie Sydney Newton. Free hot dogs and drinks also will be provided.
The stadium was built as part of ACU’s Vision in Action initiative, a $75 million transformation of campus that includes three new science facilities and two on-campus athletics stadia. The original Elmer Gray Stadium, built in 1954, was named for ACU’s first participant in the U.S. Olympic trials; Elmer Gray (’32) and his family provided the funds for the stadium to be renovated with the university’s first all-weather track, and it was named for him in 1969. Crews have been demolishing the facility this week to make way for Wildcat Stadium, a new on-campus football facility for which fundraising is ongoing.
Funds for the new Elmer Gray Stadium were provided by April (Bullock ’89) and Mark Anthony (’86), whose $30 million gift in 2014 helped launch the Vision in Action initiative and stands as the largest in ACU history.