Home/ ACU News/ Alumni News/ Smitty: A man for all seasons
Main Content
Features Academic News Alumni News Campus News ACU Online All Categories
Academic News ACU News ACU Online ACU Remembers Alumni News Campus News Faculty Spotlights Features Graduate Programs Research Sports Student Experience Student Spotlights Student Success Undergraduate Programs Why ACU?
On the recruiting trail, Don Smith (’53) was relentless.
I found out firsthand one night in 1990. Smith and I had just broadcast Abilene Christian University’s football game against Texas A&M-Kingsville University. It was the Wildcats’ 10th straight loss and “Smitty,” as he was affectionately known around ACU for the better part of half a century, was looking to bury a spoon and his sorrow in a tub of ice cream.
Riding shotgun with then-sports information director Garner Roberts (’70) at the wheel and me in the backseat, the legendary Wildcat player and assistant coach called the shots in search of a treat. We went three-and-out in our initial attempts before Smith directed us to a gas station along a darkened Texas highway that had a freezer full of ice cream cups, the kind you’d find in a school cafeteria with the pull-tab top and the wooden pseudo-spoon attached. Rock hard from having been in there for who knows how long, the dairy dessert didn’t budge. Smith’s utensil splintered into kindling on contact. As did the next one. And the next. Undaunted, he persisted until the ice cream finally softened.
A litany of ACU football players can relate.
For 13 seasons from 1968-81, Smith criss-crossed the country in passionate pursuit of young men to play for the Purple and White. And like that South Texas ice cream, they usually melted under Smith’s unyielding love and encouragement.
“He’s as good as we’ve ever had,” says Wally Bullington (’53), director of athletics emeritus and Smith’s boss as head football coach from 1968-76. “He never met a stranger and could find something good about every kid he recruited.”
One of those kids was Greg Feasel (’81). Now the executive vice president and chief operating officer of Major League Baseball’s Colorado Rockies after playing professional football for parts of eight seasons, Feasel was recruited by Smith out of Barstow, Calif. His younger brother, the late Grant Feasel (’83), would follow him to Abilene and then to the NFL.
“It was the first time I was ever away from home,” Greg says. “I was a transfer. I went to Abilene and didn’t know anybody, and my parents were 1,200 miles away. Don and his wife adopted me first and then Grant. He was there all the time, whether it was taking us to church or helping us find an odd job. Anything I needed, he was always there.”
Literally. Don and his wife, Barbara (Fleming ’50), lived in the athletics dorm at the time, A.B. Morris Hall, giving them closer access to the players and allowing them to serve as surrogate parents to the Feasel boys and numerous others.
Some of Smith’s recruiting tales are epic. Like his – and, arguably, the program’s – biggest catch, Wilbert Montgomery (’77). Bullington had gotten wind of Montgomery’s exploits as a high school running back in Greenville, Miss., from a family member. By the time Smith showed up to make his pitch for Abilene Christian, so had other schools, including Jackson State University, which already had a back of some renown on its roster: future college and pro football hall of fame member Walter “Sweetness” Payton.
Smitty didn’t want Jackson State or anyone else sweet-talking Montgomery. So one day, as the story goes, while Smith was at Montgomery’s house visiting, he spotted a coach from another school coming up the walk. The former fullback wanted to meet the opposition head on. Montgomery suggested a slip screen through the back window. A then-collegiate record 76 touchdowns later, Montgomery had himself become a Wildcat legend. He went on to NFL stardom with the Philadelphia Eagles and in 1996 was enshrined in the College Football Hall of Fame.
Smith wasn’t against using a back window for a great escape. What he couldn’t stomach was a closed front door, which he found when courting Montgomery in Mississippi.
His daughter, Donna (Smith ’75) Saffel, says because Smith grew up in California, he hadn’t experienced the extreme racial tension of the deep South. “I remember how upset he was when he came home from recruiting Wil,” Saffel says. “Dad did not see color; he saw a human being.”
And what those players saw in Smith was the kind of man they could trust with their own family. With the Montgomerys, as with the Feasels a few years later, one brother led to another. Cle Montgomery (’78), a wide receiver, soon joined Wilbert at ACU. His love for Smith began before he ever made it to campus.
It was July 1974, and Smith had driven to Greenville to pick up Wilbert for his sophomore season and Cle for his freshman year and take them back to Abilene. Somewhere in Arkansas, they stopped to get something to eat but were turned away because of the color of the Montgomerys’ skin. The incident made Smith’s skin crawl. 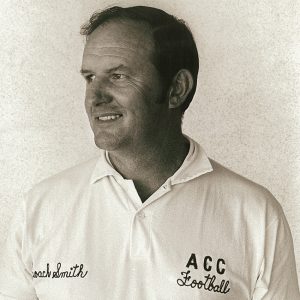 “He cried,” Cle recalls, “and then he nearly got in a fistfight (with the restaurant owner). The rest of the trip he kept telling us how sorry he was. He just saw everyone as God’s children.”
Cle credits the coach with his success on and off the field. With Smith’s encouragement, Cle graduated from ACU in four years while playing at a high enough level to make the Lone Star Conference’s 75th anniversary team and then, like Wilbert, the NFL. He played six seasons, winning a Super Bowl with the then-Los Angeles Raiders in 1983.
Smith was a two-sport star and coach. In addition to playing alongside Bullington on ACU’s 1950 undefeated football team, he helped the Wildcats’ track and field team win a national championship and other prestigious relay titles. In a touch of irony, Smith later coached Cooper High School in Abilene to the 1964 state title with only five athletes and no relay team.
Smith stepped down as an ACU assistant football coach in 1981 to go into private business but couldn’t get the game out of his system. He became head coach at Abilene Christian High School later that decade, a post he was in when I broadcast ACU games with him. During one season in which his team wasn’t playing particularly well, I asked him if his team had played the night before. Smith’s zinger of an answer? 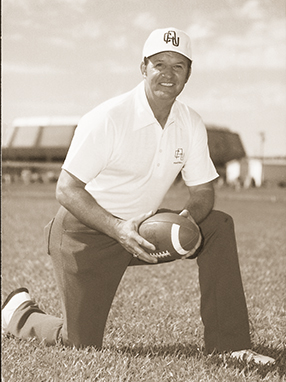 “Not much.”
To me, Smith was larger than life – “the jolliest man I’d ever met,” says Cle Montgomery – which is why his death in 2002 left such a mark. The next year, the ACU football program began the Don Smith Memorial Golf Tournament in his honor to raise money for recruiting.  This year’s event is set for Saturday, April 18, at Diamondback Golf Course in Abilene. The night before, participants are invited to the ACU scrimmage at Shotwell Stadium and a gathering afterward at Sharon’s Barbeque hosted by current head coach Ken Collums and his staff.
Recruiting is the lifeblood of any college football program. At ACU, the challenge is even greater. Like Smith, Collums is looking for more than just good players.
“We are fully committed to growing these guys into the kind of men who will love God first and eventually their wives and kids,” Collums says. “It is our No. 1 priority. We are doing our best each day to add to the incredible foundation laid long ago by men like Don Smith.”
I hope you’ll join us for this year’s event on April 17-18. We’ll talk some football and share a few stories about Smitty. I can’t guarantee you’ll play well. But I can promise you won’t have to look hard to find the ice cream. Get the full scoop here.
PREVIOUS POST   NEXT POST
SHARE: