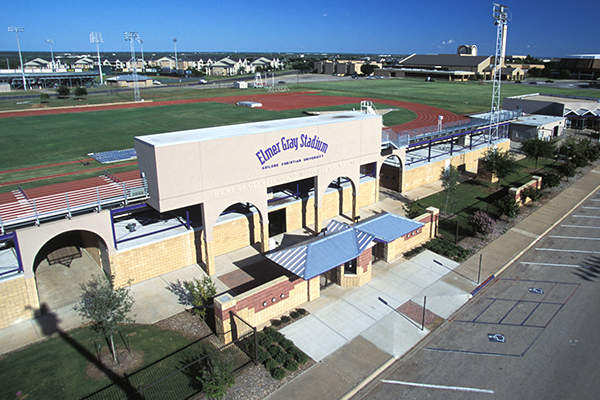 Demolition of old Elmer Gray Stadium, a venerable U.S. track and field venue for decades at Abilene Christian University, will begin at 9 a.m. Monday, March 30. It will make way for the eventual footprint of the proposed Wildcat Stadium and a return to on-campus football games for the first time since World War II.


Just to the southwest, new Elmer Gray Stadium is taking shape as construction crews prepare it for an April 10 grand opening (11:30 a.m.) and an inaugural track and field meet the next day.
The second annual Wes Kittley Invitational on April 11 will bring the most high-powered full-team competition to campus since 1960, when ACU, the University of Michigan, Ohio State University and the University of Texas faced off in a quadrangular meet before a standing-room-only crowd. This year’s meet, which features ACU along with Texas Tech University and TCU of the Big 12 Conference, begins at 3 p.m.
Construction on the new stadium, which is shared with the Wildcat women’s soccer program, will still be a bit of a work in progress for its opening. And throwing events will take place across Ambler Avenue but all others will be held on the new running surface at the venue along Campus Court, north of Edwards Hall.
Gray Stadium’s full-pour polyurethane performance surface is purple and was installed by Beynon, whose handiwork can be seen in track and field stadiums at major universities throughout the Big 12, Big 10, Pac 12, Southeastern and Atlantic Coast conferences.
The stadium is one of five major building projects that are part of ACU’s $75 million Vision in Action initiative.
Watch this blog for construction updates and special features about ACU’s legendary track and field program – named “Texas Sports Dynasty of the Century” by Texas Monthly magazine in 1999 – and the old stadium where national champions and Olympians thrilled fans for generations.