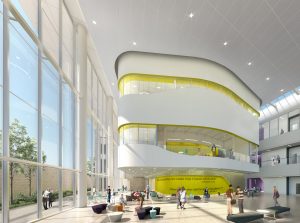 The groundbreaking ceremony will take place at 11 a.m. next Tuesday, March 31, after which crews will begin constructing the 54,000-square-foot classroom and laboratory facility serving ACU’s biology, chemistry and biochemistry, and pre-health professions programs.
Halbert-Walling Research Center is named for David (’78) and Kathy (Gay ’78) Halbert, whose $15 million gift through their Caris Foundation was one of the three major contributions that will transform the ACU campus in a way not seen for 50 years, and for David Halbert’s grandfather, Dean Walling (’30), a former ACU trustee and chair of the Design for Development Campaign that led to the construction of numerous buildings in the 1960s and ’70s.
Halbert-Walling is one of three science facilities to be built through the $75 million Vision in Action initiative. The Engineering and Physics Laboratories at Bennett Gymnasium have been completed, and crews continue to work on transforming Foster Science Building into Onstead Science Center. Across campus, the new Elmer Gray Stadium for soccer and track and field is on pace for an April 10 grand opening and Wildcat Stadium will be the first on-campus ACU football facility since World War II.
The groundbreaking for Halbert-Walling follows the demolition of Chambers Hall, the former residence hall, library, dining hall and academic facility whose piecemeal destruction can be seen via time-lapse video here. Halbert-Walling is scheduled for completion in Fall 2016.
PREVIOUS POST   NEXT POST
SHARE: