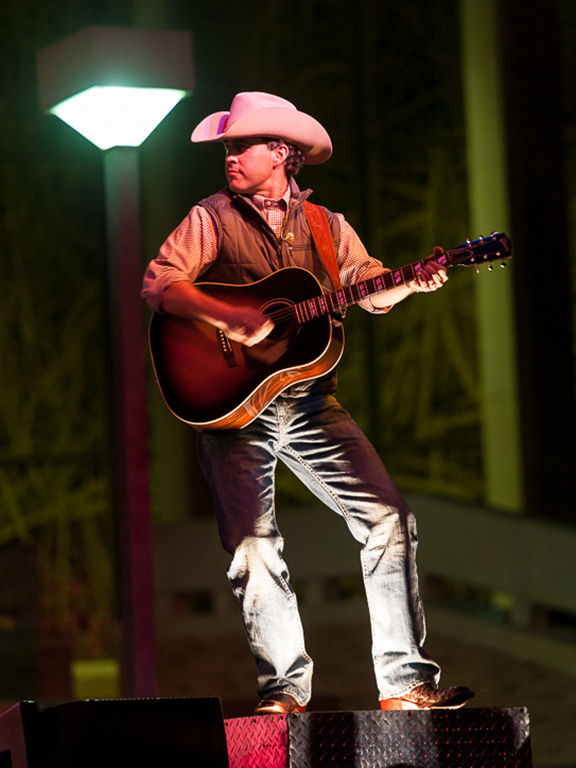 A little more than 52 miles of pavement on Highway 84 separate their West Texas hometowns – Abilene and Coleman – but Aaron Watson (’00) and Ronnie Dunn (’76), respectively, share an alma mater, a fierce independent spirit and now, a piece of music history.
Today, Watson became the second former Abilene Christian University student in nearly four years to have an album hit No. 1 on the country charts when The Underdog debuted in the top spot.
He joins Dunn, whose self-titled solo album hit No. 1 in 2009 after leaving the uber-successful duo of Brooks & Dunn behind and its more than 30 million records and 20 No. 1 singles. Dunn’s voice is one of the most iconic in the business, but Watson is just now turning heads in Nashville after becoming a well-known but hard-earned Texas music scene commodity.
From a Rolling Stone profile today by Andrew Leahey, “Aaron Watson Goes From Indie ‘Underdog’ to Country Chart’s Top Dog”:

“A lot of people call me ‘up and coming,’ but it’s more like ‘slow and steady,’ … I’ve been doing this for 15 years, 12 albums and 2,000-plus shows,” he adds. “I’ve been with my manager, my booking agent and my distributor forever. We have wonderful working relationships, and what we’re doing right now is pretty much a ‘David versus Goliath’ kind of situation, because I’ve never been embraced by the music industry. There’s only so many times you can be told you’ll never make it. At some point, you have to say, ‘Hey, we’re gonna need to take a different route to get where we’re wanting to go.’ And that’s what we did. If someone shuts a door in your face, you don’t let that stop you; you pick the lock, take it off its hinges or find another door that’s open.”

Watson has played his alma mater’s campus several times, and is a crowd favorite whether entertaining at Homecoming or Mingle and Jingle or a football pre-game concert.


On Feb. 15 he played at the historic Ryman Auditorium in Nashville as part of the Sam’s Place – Music for the Spirit series of Christian/gospel-themed concerts. He shared the stage with host Steven Curtis Chapman, Ellie Holcomb, Josh Turner, Sugarland’s Kristian Bush, and Point of Grace.
Watson makes his Grand Ole Opry debut March 31 with The Charlie Daniels Band, Larry Gatlin and Easton Corbin.
Holly Dunn (’79) – no relation to Ronnie Dunn – is the only ACU graduate to have been a member of the Grand Ole Opry, performing regularly for 20 years (1989-2009) and helping host TNN’s “Opry Backstage” from 1998-2000.
The photo on Watson’s The Underdog album is by Abilene photographer Lindsey (Hoskins ’03) Cotton, as is the image of Aaron at Rolling Stone.
Watch this blog for more information about Watson’s Opry performance and ACU’s legacy of Nashville music scene standouts.
PREVIOUS POST   NEXT POST
SHARE: