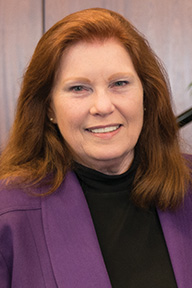 Dr. Jerilyn (Kyker ’70) Pfeifer, a former ACU professor and administrator who was the first woman to be named principal of an Abilene high school, died Feb. 22, 2015, in Abilene at age 66.
A memorial service will be held at 11 a.m. Thursday at Highland Church of Christ (425 Highland Ave, Abilene, Texas 79605). A private family graveside service will be held that afternoon. Visitation will 6-8 p.m. Wednesday at Piersall Funeral Directors (733 Butternut St., Abilene, Texas 79602).
Born Sept. 15, 1948, in Abilene, she graduated from Abilene High School in 1966 and married Walt Pfeifer (’70) on June 6, 1969. She earned a M.Ed. in secondary education from ACU in 1973 and an Ed.D. degree from Texas Tech University in 1981.
Pfeifer’s long career in education included roles as secondary teacher (English, history and speech) and principal, director of career and technology, education director of K-12 language arts at the district level, superintendent of three school districts (Albany, Venus and Everman), and president of the Texas Joint Council of Teachers of English. In 1991 she was named principal of Abilene Cooper High School.
She was superintendent of the Everman ISD in 2013 when she received the Morlan Medal Award from ACU’s Department of Teacher Education. She was appointed by Gov. Rick Perry to the Board of Regents for the Texas State Technical College System and received a Distinguished Service award from the Vocational Home Economics Teachers Association of Texas. She also served on the boards of Faith Works, Eternal Threads and the Boys & Girls Clubs of Abilene, and was a member of the United Way of Abilene’s 1992 Campaign Cabinet.
Pfeifer served at ACU from 1981-91 as associate professor of teacher education, director of academic services, assistant to the provost, and assistant vice president for enrollment management. She was named 1986 Outstanding Teacher of the Year in ACU’s College of Professional Studies.
She was predeceased by her father, Dr. Rex P. Kyker (’43).
Among survivors are Walt, her husband of 45 years; two sons, Dylan Pfeifer (’99) and Daren Pfeifer; one grandchild; her mother, Chris (White ’46) Kyker; brothers Rob Kyker (’72) and Ricky Kyker (’81); and sisters Lindy (Kyker ’74) Fullerton and Jan (Kyker ’75) Bryan.