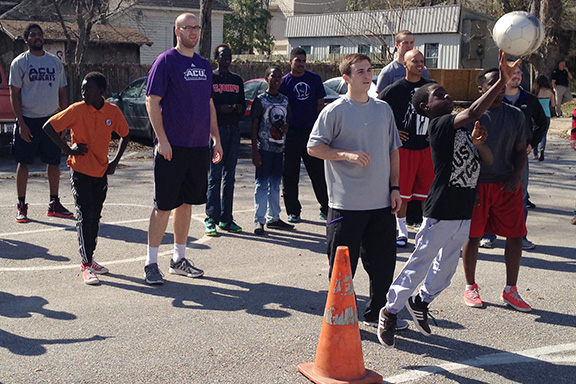 This had all the makings of one of those syrupy sweet stories that flood Facebook and are so inspiring, people don’t even care if they’re true.


A college basketball team, smack in the middle of a long losing streak with another tough opponent looming, spends a Sunday morning shooting hoops with inner city kids, feeding the hungry and worshipping at an ethnically, generationally and socioeconomically diverse church assembly. The experience opens their eyes and reminds the team there are more important things in life than sports and worse calamities than a string of successive setbacks on a scoreboard.
The next night, with the game hanging in the balance and the team trailing, the players look up into the crowd and see the church kids cheering them on. For dramatic effect, maybe the youngsters make some kind of an Angels-in-the-Outfield arm-flap or hand motion, mimicking a shooter’s stroke or perhaps the perfect technique for setting a screen. Cherubim in the Cheap Seats.
Magically, the game turns. With the kids going bonkers in the bleachers, the team rallies to win. Players and coaches will later say they can’t quite put their fingers on it, but something powerful happened in that moment. With the losing streak in the rearview mirror, they board the bus to head home, carrying with them not just a single victory but a new perspective on what really matters.
This was going to be Buzzfeed fodder. Upworthy-worthy. It might have even had Huff Post potential, complete with one of those over-the-top, click-bait, all caps captions: “WHAT HAPPENED NEXT WILL LITERALLY BLOW YOUR MIND!”
If only it had happened that way. 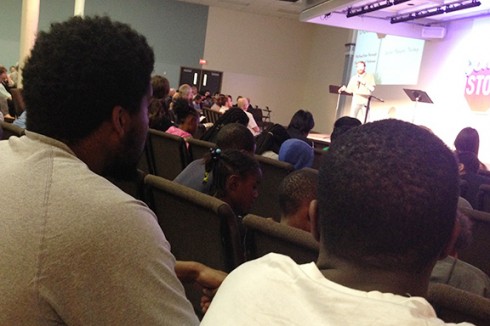 Turns out, losing streaks don’t always die easily, a truth many members of the Impact Houston Church of Christ learned the hard way long ago.
Impact was founded in 1987 by Abilene Christian University alumni Charlie Middlebrook (’68), Ron Sellers (’69) and the late Doug Williams (’64) in an effort to serve one of the poorest parts of Houston. At a time when many churches were moving as far away from the squalor of downtown, Middlebrook, Sellers and Williams leaned in. Maybe not Magi exactly, but certainly three men wise enough to look for Jesus in unexpected places.
“We came in here with an amazing ignorance about what the needs were in the inner city,” Middlebrook said when Impact was presented ACU’s Christian Service Award in 2000. They found out soon enough.
Listening to their new neighbors on a couple of city blocks in the shadow of Interstates 10 and 45, Impact soon developed ministries designed to supply what was lacking, like food, clothing, job skills and simply safe places and safe people with whom to connect and have community. Nearly 30 years later, Impact has a thriving food and clothing distribution center, a home for recovering addicts, and multiple meeting times during the week, including worship on Sunday mornings. 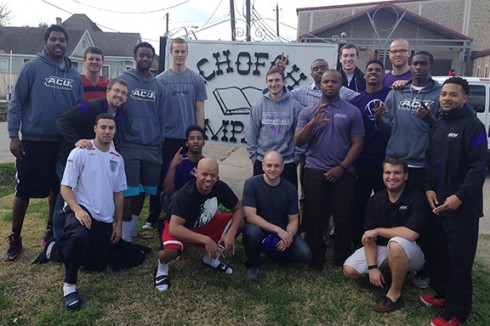 It was on a recent Sunday morning that the ACU men’s basketball team dropped in.
The Wildcats had lost the night before to Lamar University in Beaumont, Texas, a game that was tied at halftime and remained tight for the first 10 minutes of the second half before the resurgent Cardinals pulled away to deal ACU a fifth straight defeat. Head coach Joe Golding (’99) certainly could’ve used his team’s one day off for any number of basketball-related activities to prepare his team for a Monday night matchup against Houston Baptist University. But when he learned of the opportunity to spend the morning at Impact, he jumped at it.
If his players’ spirits were sagging that Sunday morning, you couldn’t tell. They bounded off the team bus and made their way to the blacktop at the back of the property where some of the Impact middle school guys were eagerly waiting for them. After quick introductions, the group agreed to a game of knockout, a high-speed, single-file version of H-O-R-S-E in which you stay alive by making a basket before the person behind you. ACU junior sharpshooter Parker Wentz, despite repeated attempts to intentionally miss, accidentally banked in what proved to be the game-winner. The team and the kids high-fived and huddled up for a prayer of mutual blessing before making their way to the worship assembly.
Inside, the ACU coaches and players found a congregation as diverse as they are. This hodgepodge of hoopsters – hailing from Eastern Europe, West Texas, both coasts and several states in between – walked into a room full of churchgoers dotting nearly every position along the racial and socioeconomic spectra. The penniless and the powerful. Some with terminal degrees, others terminal diseases. All sitting side by side, united in some cases by nothing other than their belief in a God who somehow unscrambles this Rubik’s Cube of humanity into something that makes sense.
Rather than sequestering themselves at the back of the auditorium, the ACU players sprinkled in amongst the youth group. They joined in when elder and worship leader Harvey Davis belted out hymns in his uniquely aerobic style of music ministry. And when the offering was taken to help feed and clothe and nurture this struggling community, many of the ACU coaches and players pitched in, in some cases – as the apostle Paul once said – from their own poverty.
After the assembly, the team stacked cushioned chairs used for the Spanish-speaking service in the common room off the kitchen and began setting up tables and folding chairs for the lunch Impact serves to the community each Sunday after services. Golding and his assistants Brette Tanner, Patrice Days, Solomon Bozeman and Cooper Schmidt were first in line to help. These coaches and players, some of the most physically and mentally capable people you’ll ever meet, humbled themselves, speaking kindly and warmly welcoming those whom the world might call “the least of these.”
Alas, the feel-good Sunday story went off script Monday. ACU, shorthanded following Golding’s dismissal of two players for violations of team rules, lost to HBU. The losing streak continued.
The weekend was a good reminder that doing the right thing doesn’t always produce the desired result. At least not right away. Telling a team to try harder can be a little like telling a homeless person to get a job. It’s rarely that simple.
On the surface, neither the men’s team’s record this season nor the assembly of the saints at Impact are particularly impressive in the ways the world has been conditioned to see such things. But look a little more closely.
The team won a holiday tournament in December and, with still seven games left, already has four more wins against Division I opponents than its inaugural Southland Conference season a year ago. And Impact continues to help many of Houston’s homeless and low-income families inch closer toward finding a place to stay, or a meal to eat, or a life controlled only by the substance of the gifts God has given each of them.
To my knowledge, there is no miracle cure for winning at basketball or life. But maybe there is a minor miracle merely in the willingness to keep coming together, even – and especially – when things aren’t going your way. That’s how it happens at Impact, as the Wildcats witnessed firsthand.
PREVIOUS POST   NEXT POST
SHARE: