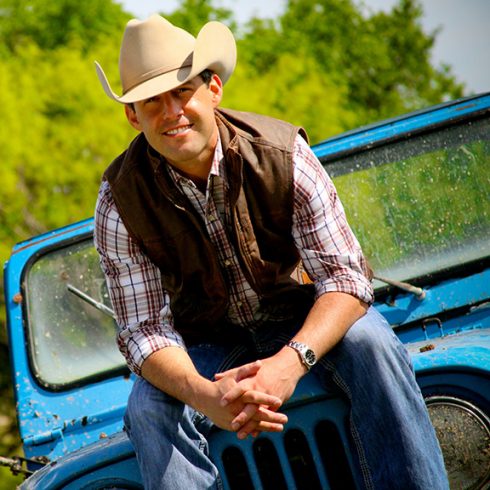 You can pinch Aaron Watson (’00) and let the Abilene Christian University graduate know he’s no longer dreaming:
He’s about to put his well-worn Cowboy boots on two of the biggest stages in his chosen line of work.
One of the brightest young stars in Texas country music, Watson will perform Sunday night (Feb. 15) at the historic Ryman Auditorium in Nashville, Tenn., and make his Grand Ole Opry debut Tuesday, March 31.
The Ryman gig is part of the Sam’s Place – Music for the Spirit series of Christian/gospel-themed concerts. He will perform along with host Steven Curtis Chapman, Ellie Holcomb, Josh Turner, Sugarland’s Kristian Bush, and Point of Grace.
Holcomb is the daughter of ACU alum and songwriter/producer Brown Bannister (’75), who has won 14 Grammys, 25 Gospel Music Association Dove awards and was inducted in 2014 to the Gospel Music Hall of Fame (joining others including Elvis Presley, Dolly Parton, Amy Grant, Bill and Gloria Gaither, Pat Boone, Ricky Skaggs, Al Green, Michael W. Smith and Aretha Franklin).
According to the Ryman website:

“Sam’s Place takes its name from charismatic evangelist Samuel Porter Jones (1847-1906), who gained fame in the region for his energetic sermons filled of fire and brimstone during the mid-1880s. On May 10, 1885, he led a tent revival in downtown Nashville for more than 5,000 which was attended by riverboat captain Thomas Green Ryman (1841-1904). Ryman experienced a conversion that night and, inspired by the multitude unable to find room under the tent, made it his mission to construct of a great tabernacle ‘for all denominations’ to join in worship. Seven years later, the Union Gospel Tabernacle opened its doors in 1892. It was Jones, while delivering Ryman’s eulogy at the Tabernacle on Christmas Day in 1904, who proposed the building’s name be changed to Ryman Auditorium to thunderous agreement.”

The March 31 show in the Opryhouse features Watson, The Charlie Daniels Band, Easton Corbin and Larry Gatlin.
Gatlin also has a Texas connection, having been born in Seminole, quarterbacked Odessa High School in 1964, lived in Abilene, played football for the University of Houston and – together with his two siblings as Larry Gatlin and The Gatlin Brothers – recorded 33 Top 40 singles with one of the top country/pop/gospel groups of the 1970s and ’80s.
Watson joins Holly Dunn (’79) and Ronnie Dunn (’76), formerly of Brooks and Dunn, as the only former Abilene Christian vocalists to perform live for an Opry audience. Those two Dunns are not related, but Holly’s brother, Chris [Dunn] Waters (’73), was a successful songwriter in Nashville.
Holly is the only ACU graduate to have been a member of the Grand Ole Opry.
Watch this blog for more information about Watson’s Opry performance and ACU’s legacy of Nashville music scene standouts.