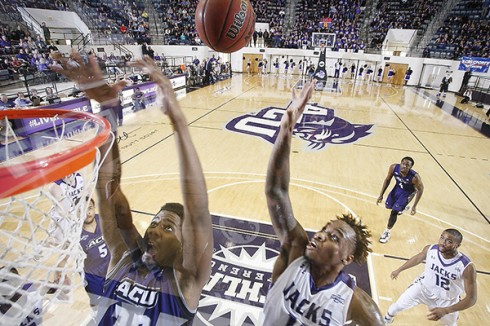 The ball seemed to hang in the air forever, like in one of those cheesy ABC After School Specials. This particular moment was special, but it wasn’t after school. It was Saturday, Jan. 17. And it was on CBS Sports Network, not ABC. Abilene Christian University’s halftime buzzer-beating bomb flew toward a sea of purple in Section F.


Splash. Score. Chaos.
That 3-point, 30-foot fling took the Wildcats to the locker room with a four-point lead on mighty Stephen F. Austin State University, and the Moody Coliseum crowd of nearly 3,000 – led vocally by a raucous student section crammed into Section F – nearly burst at the seams. The resulting tremor rattled the rafters, the shockwave nearly seismic enough to send me – Land of the Lost-style – hurtling back to an era when this fossil rocked.
Moody opened in 1968. And though it still shows well from multiple angles and in comparison to many facilities around the conference and country, 47 is downright Jurassic in arena years. Dinosaurs like me remember Section F’s glory days. When we put 2,500-plus into the seats for the men’s game against Atlantic 10-member Duquesne University last month, there was chatter among the longer-toothed Wildcats about the rowdiest games the coliseum has hosted. Some pointed to the women’s games in the mid-1990s when Jennifer (Clarkson ’96) Frazier was running roughshod over the Lone Star Conference and leading ACU into the NCAA Division II national semifinals. 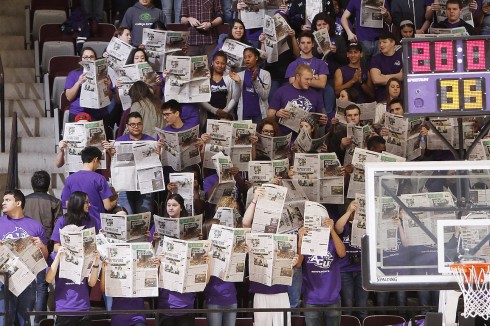 But the consensus pandemonium pick? The Pepperdine-ACU men’s game in December 1984 when Ryant Greene (’87) and Brett Enzor (’88) engineered the Wildcats’ 93-89 upset of the Division I Waves in a battle for no less than the soul of the Restoration Movement. Or so it felt that night.
I got to ACU a few years later in the midst of what became a 44-game home win streak for the men’s team. In those days, about the only way to guarantee a seat in Section F was to get there early. Like maybe Chapel the day before. And once the game started, the energy never stopped. The passion was equal parts choreography and chaos. I remember one of my classmates, Todd Denton (’88), dressing in multiple layers and having his buddies “accidentally” rip his shirt off as if trying to restrain him from attacking the officials when he thought ACU had been ripped off by a bad call.
The win streak ended on the first night of the second semester in 1988. In the ensuing years, Section F’s mystique faded along with the men’s team’s fortunes. There have been flashes of lightning since then – like in 2008 when Tarleton State University came to town for a Top 25 showdown with what wound up a 20-win ACU team – but we never caught it in a bottle to use again.
Now, something special may once again be brewing behind that backboard. Last year, a spunky student group known as Wildcat Reign staked its claim to the best seats in the house at all ACU sporting events, including the 50-yard line at football games and Section F for volleyball and hoops. Those students not only witnessed some great moments in the university’s first season in Division I – like the volleyball team’s upset of Texas Tech University, the women’s basketball team’s win over NCAA tournament team Oral Roberts University, and Parker Wentz’s coast-to-coast, buzzer-beating, goaltend-inducing layup to stun the University of Central Arkansas – they may well have, at least in part, affected the positive outcome with their energy. 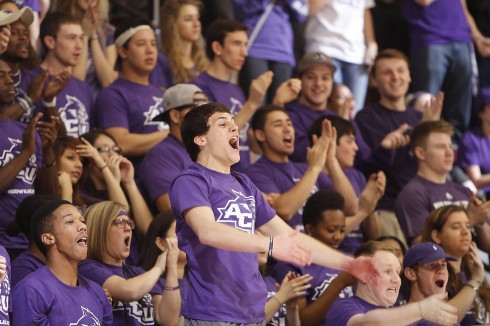 The momentum has carried over this season. Wildcat Reign, dangling free eats from sponsor Buffalo Wild Wings out in front of them, led hundreds of students into the double gym for a watch party to cheer on the ACU football team in its Aug. 27 game against Georgia State that aired live on ESPNU. In addition to the aforementioned Duquesne game, they showed up in full force and throat for the men’s hoops win over Division I opponent Sacramento State University in December.
But the students saved their best for first. Never in the history of ACU basketball had the Wildcats played a home game on national television. (A few games through the years aired on regional networks or, like last year, online via ESPN3.) But for the first time ever, America came to Moody – and vice-versa – Jan. 17 on the airwaves of CBS Sports Network, the cable television offspring of CBS Sports. 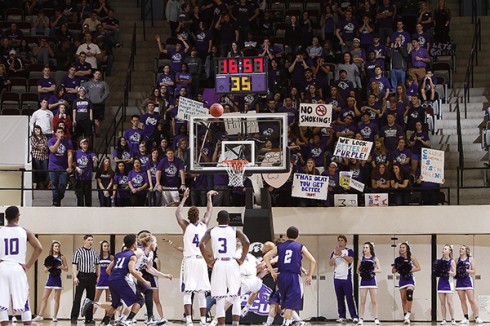 And what they saw was Reign. A steady student downpour of delirium, coupled with the claps of a thunderous community crowd, made Moody feel fuller and sound louder than I’ve ever experienced, peaking when the just-before-halftime heave dropped in. I was calling the game for CBS Sports Network. When the game ended, the ringing in my ears didn’t. I hope it never stops.
There is yet work to do and room to grow. Attendance at Wildcat sporting events isn’t where it needs to be. But Moody’s roof isn’t any higher than the ceiling of ACU’s fan base. Big-time teams and historic moments are coming to Abilene through ACU athletics and shining a national spotlight on the university and the city. And both the campus and Abilene communities are beginning to see what a different game Division I is. The kids are literally and figuratively waving the banner, and they must. No legitimate home court advantage in any collegiate sport exists without a passionate and well-populated student section.
The cameras loved ACU on Jan. 17, and that gives me hope that maybe, just maybe, the volume – in bodies and decibels – can finally be turned back up. And if a Wildcat fan storm really is gathering, its eye will be in F. 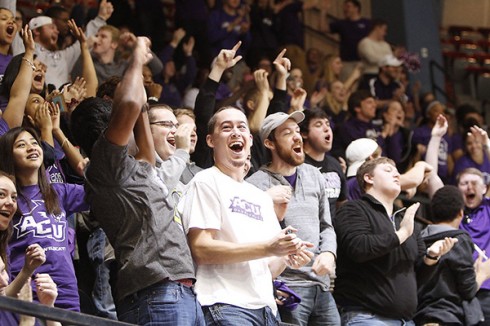