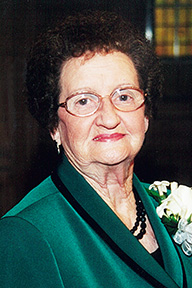 Ruby Dell (Bonham) Guy, whose long career at Abilene Christian University inspired an annual award to recognize members of its staff who embody selfless service, lived in Grapevine, Texas, and died Jan. 25, 2015, in North Richland Hills at age 87.
A funeral service will be held today at 2 p.m. at the Highland Church of Christ (425 Highland Avenue, Abilene, TX 79605). Services are under the direction of Elmwood Funeral Home. Burial will follow at Elmwood Memorial Park.
Guy was born Oct. 24, 1927, in rural Arkansas, but grew up in Delhi, Okla, where she graduated from high school and worked on the family farm. On Dec. 14, 1946, in Erick, Okla., she married Leroy Guy, a disabled World War II veteran who later was hospitalized for many of the 50 years they were married.
The couple farmed for several years before moving with their four children to Abilene in 1964, where she became a longtime member of Highland Church of Christ. Ruby worked at ACU for 37 years in the business and registrar offices, and in the technical services area of Brown Library. She retired in May 1993 but continued to serve part time in the library.
The Unsung Hero Award for professional staff was established at ACU in 1995 to honor Guy and her close friend, Sammye Lale, who were known for their spirit of helping and encouraging others, especially students. Guy frequently assumed the role of a feisty advocate for students in all matters, from academics to wintertime heat in residence halls. Library co-workers recall her ministry of prayer and how she joyfully entered the back door each day to exclaim, “This is the day the Lord has made; let us rejoice and be glad in it!”
An avid sports fan, Guy was a loyal follower of ACU basketball and football teams, and was voted by students to be grand marshal of the 1994 Homecoming Parade.
She was preceded in death by her husband, Leroy; her parents, Albert and Avil Bonham; and a brother, Lee Bonham. Among survivors are two daughters, Barbara Moore and Donna (Guy ’72) Campbell; two sons, Eddie Guy (’79) and John Guy (’82); six grandchildren; seven great-grandchildren; three brothers; and one sister.