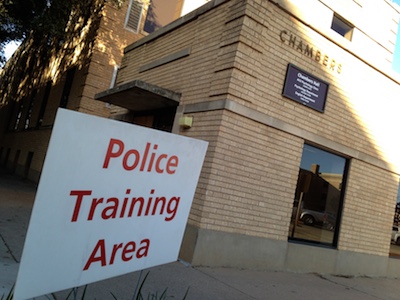 Chambers Hall at Abilene Christian University is too close to Phillips Education Building to bring it down with a bang, but the 85-year-old former residence hall, cafeteria, library and academic building still saw some fireworks Wednesday.
The Department of Psychology, Chambers’ final occupants, were moved out over the Christmas break, leaving the building empty – and providing a training ground for local police, who practiced forceable entry, hostage negotiation, SWAT-team maneuvers and other procedures inside its empty halls, classrooms and offices.
“It’s a unique opportunity to have a building that’s still fully functional, with lighting and air conditioning,” said Jimmy Ellison, chief of police and director of public safety for ACU. “You just don’t get that opportunity often. It’s a good combination of an office and academic building.”
The building was roped off, and access to the building was tightly restricted because of the use of live explosives. In an email to campus, the ACU Police Department cautioned, “You may also see officers and SWAT team members going into/out of Chambers Hall and hear sounds of gunfire or other small explosions inside Chambers Hall as officers conduct various aspects of training and exercises.”
ACUPD partnered with the Abilene Police Department to conduct the exercises, which continue into today. ACU facilities crews will scour the building this week to remove any remaining usable items, such as doorknobs, hinges and the like, after which the demolition process will begin with asbestos abatement. When the time comes for removing the building itself, it will come down brick-by-brick rather than all at once.
Chambers will make way for the new Halbert-Walling Research Center, part of the $75 million, five-project Vision in Action initiative that will transform ACU’s science and athletics programs.