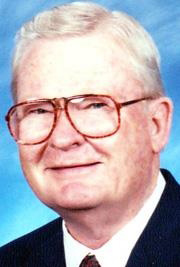 Former longtime Abilene Christian University trustee Wayne Holt (’56) died Jan. 2, 2015, at age 81. A funeral service will be held at 3 p.m. Wednesday, Jan. 7, at the Broadway Church of Christ in Lubbock, Texas (1924 Broadway Street, Lubbock, TX 79401), with visitation at 1:30 p.m.
He was born May 6, 1933, in Olney, Texas, and graduated from Olney High School in 1951. He attended Paris (Texas) Junior College and ACU, where he met Patsy Hufstedler (’57) on a blind date and married her Oct. 8, 1955. He played football at Abilene Christian and also was a boxer.
Holt owned and operated J.D. Hufstedler Truck Co. in Lubbock. He moved to Austin in 1996 to work with his son, Mark Holt, at Stuart Customs until retiring in 2008 and returning to Lubbock in 2013.
He was vice chair of the ACU Advisory Board before serving on ACU’s Board of Trustees from 1972-96. Holt also was a trustee of The Children’s Home of Lubbock, coached Little League baseball, and was a Bible school teacher and elder at Broadway Church of Christ.
He was preceded in death by his parents, Arthur Judson Holt and Flora Irene Holt. Among survivors are Patsy, his wife of 59 years; four sons, Richard Holt (’78), Mark Holt (’80), Mike Holt (’83) and Ragan Holt (’87); 10 grandchildren; five great-grandchildren; and a brother, Carl Holt.
In lieu of flowers, the family encourages memorials to be made online in Wayne’s name at ACU (or mailed to Gift Records, ACU Box 29132, Abilene, Texas 79699-9132) or online at The Children’s Home of Lubbock (P.O. Box 2824, Lubbock, TX 79408).