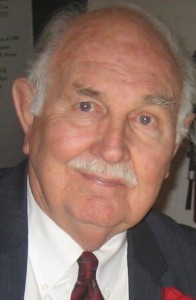 Clinton Everett Howeth (’52), former longtime director of admissions and placement at Abilene Christian University, died Dec. 17, 2014, in Glen Rose, Texas, at age 84.
He was born Sept. 12, 1930, in Glen Rose, where he also graduated from high school in 1948. Howeth earned a degree in agriculture from ACU the same year – 1952 – as he married Shirley Belcher (’53). He earned another bachelor’s degree (in business) from ACU in 1974 and a master’s degree in management and human relations in 1975.
After serving from 1953-55 in the U.S. Army during the Korean conflict, he worked as assistant personnel officer for the USDA Soil Conservation service in Temple. He joined the ACU staff in 1966 and served 26 years, most of them as director of admissions and placement. He also was an international admissions counselor, traveling throughout the Far East to recruit students. Howeth was president of the Texas Association for School, College and University Staffing, and a member of the Southwest Placement Association and of the National Association of Foreign Student Admissions. He was recognized as ACU Professional Staff Member of the Year in 1980, served as chair of the ACU Credit Union board and retired in 1992.
Howeth was preceded in death by Shirley, his wife of 63 years who passed away 12 days earlier; and his parents, Floyd and Ethel (Eddy) Howeth. Among survivors are his daughters, Debbie (Howeth ’75) Lambert, Denise (Howeth ’77) York and Diane (Howeth ’83) Hulburt; six grandchildren; and six great grandchildren.
In lieu of flowers, the family encourages memorials to be made online to the Gilmer and Lois Belcher Scholarship Fund at ACU (or mailed to Gift Records, ACU Box 29132, Abilene, Texas 79699-9132).