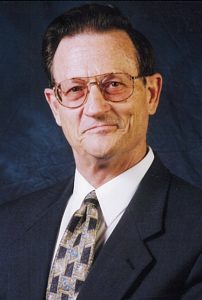 Longtime Abilene Christian University history professor Dr. Arlie J. Hoover died Dec. 11 in Pasadena, Texas, at age 78. A memorial service will be held Tuesday, Dec. 16 at 6 p.m. at Clear Lake Church of Christ in Houston (938 El Dorado Blvd., 77062).
Hoover was born March 14, 1936, in Slaton, Texas, and graduated from Slaton High School in 1954. He met Gloria Kay Garrison while the two were attending Florida Christian College and they married June 7, 1959.
He earned an A.A. degree in Bible from FCC in 1960, a B.A. in history from the University of Tampa (1960), an M.A. (1962) and Ph.D. (1965) in history and philosophy from The University of Texas at Austin, did doctoral research at the Free University of Berlin, post-doctoral research at the University of Heidelberg, and received a Doctor of Divinity degree from Emmanuel College in Oxford, England (1992). While not an honorary degree, the D.D. was granted in recognition of the influence of his 1980 book, Dear Agnos: A Defense of Christianity.
Hoover was professor of history at Pepperdine University (1964-77) and dean of Columbia Christian College (1977-80) before joining ACU’s faculty in 1980. He retired in 2010 as professor emeritus of history.
A recipient of numerous academic awards, grants and fellowships – including a Fulbright Fellowship and a grant from the National Endowment for the Humanities – he traveled extensively to research and lecture across the U.S., Europe and the Middle East. He was a respected scholar on the Holocaust; German philosopher, poet and composer Friedrich Nietzsche; and world, American and religious history. A prolific writer, Hoover authored 12 books and numerous articles for publications, and spoke German fluently.
He served as a minister for congregation in Florida, Texas, California and Oregon, and as a deacon at the Hillcrest Church of Christ in Abilene.
He was preceded in death by his parents, A.J. and Ruth Elizabeth (Clem) Hoover, a brother, Bobby Hoover; and a sister, Myrna Brown. Survivors include Gloria, his wife of 55 years; two daughters, Arletta (Hoover ’92) Beard and Cathey (Hoover ’97) Wilder; four grandchildren; and brothers Tim Hoover and Nathaniel Hoover.