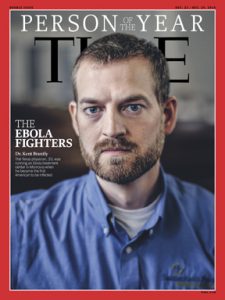 This is Dec. 10 and it’s been 58 years – to the day – since Wildcats appeared on the front covers of Life and Time, two of the most iconic news-feature magazines in the world.
Bobby Morrow and Kent Brantly, M.D., were the honorees, the first an Abilene Christian University junior who was an Olympic hero and the second a 2003 graduate serving as a medical missionary in West Africa. Both have generated miles of headlines for their alma mater.

Morrow (’58) was on the Dec. 10, 1956, issue of Life magazine, crossing the finish line to win one of his three Olympic gold medals in Melbourne, Australia.

Brantly, a physician for Samaritan’s Purse who overcame great odds to survive the deadly Ebola virus disease he contracted in Liberia this summer, is one of several health professionals to appear on covers of Time magazine today as one of “The Ebola Fighters,” the magazine’s Person of the Year for 2014.

After recovering from his illness, Brantly went on to make life-saving donations of plasma to others being treated for the disease and has been speaking around the nation to remind people of the urgent need to stop Ebola where it originates overseas. Twice he has been a special guest of President Barack Obama at The White House. A compilation of Kent’s experiences can be seen here.

Life was a celebrated magazine published in several forms and frequencies from 1883-2007.

The photo-rich publication was known for publishing the memoirs of Harry S. Truman and Sir Winston Churchill, works from Ernest Hemingway, and images from noted photojournalists such as Alfred Eisenstaedt and Gordon Parks. News and photo correspondents from Life and Time accompanied troops in several wars, changing the public’s perception of armed conflict.

The celebrity of Morrow – who appeared on TV’s “The Ed Sullivan Show” and also won the 1957 Sullivan Award (no relation to Ed) as the nation’s top amateur athlete – was fueled further when he appeared on the cover of the Jan. 7, 1957, issue of Sports Illustrated as its 1956 Sportsman of the Year. Finalists for the recognition were New York Yankee stars Mickey Mantle and Don Larsen, heavyweight boxing champion Floyd Patterson, NFL MVP Frank Gifford, and Heisman Trophy-winning running back Paul Hornung of Notre Dame.

Morrow also was on Sports Illustrated’s July 2, 1956, cover along with Duke University’s Dave Sime. The two American sprint sensations were expected to star in the upcoming 1956 Olympic Games, although Sime missed participating because of an injury. Morrow lived up to the fanfare, and more, as a worldwide audience watched him win the most medals since Jesse Owens in 1936.

ACU junior quartermiler Earl Young (’62), made the front cover of Sports Illustrated’s June 19, 1961, issue, a few months after he won a gold medal for his country in the 1960 Olympic Games in Rome. “The Bright New Hopes of U.S. Track” was the cover story title.