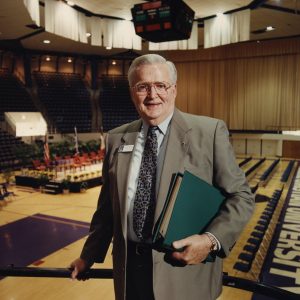 Dr. Ted Duncan Starnes (’55), former Abilene Christian University theatre technical director and director of university events, died Dec. 7, 2014, in Abilene, Texas, at age 81, following a 38-year career in higher education at ACU and Pepperdine University.
A memorial service will be held at 2 p.m. Wednesday, Dec. 10 at Hillcrest Church of Christ (where Starnes was a member), followed by burial at Elliott-Hamil Garden of Memories Cemetery. Visitation with the family will be 5:30-7:30 p.m. today at The Hamil Family Funeral Home (6449 Buffalo Gap Rd.)
Starnes was born July 5, 1933, in Houston and graduated from Abilene High School in 1951. After earning a B.A. in speech/drama from ACU in 1955, he served in the U.S. Army from 1955-57, earned a Master of Arts degree in speech/drama from Pepperdine University in 1961 and a doctorate in drama education from the University of North Texas in 1983. He also studied at the University of Southern California.
He met Beverley Camp (’57) during his senior and her freshman year at ACU, and they married July 5, 1957.
Starnes twice served as director of theatre at Pepperdine (1961-70 and 1976-79) but invested the majority of his career at ACU, where he joined the faculty as assistant professor of communication in 1970 and became associate professor in 1979. He was named director of university events in 1979, director of volunteer development and ACU events in 1989, and he retired in 1999.
His organizational skills and his years of expertise in theatre, lighting and staging – he was largely technical director of numerous dinner theatre shows and Homecoming musicals at ACU but also directed dinner theatre productions such as “The Rainmaker” in 1982 – served him well after he left the classroom. Starnes’ later work encompassed directing Sing Song and Freshman Follies, and overseeing design and production of major ACU events such as Commencement, Opening Assembly, the President’s Circle Dinner, fundraising venues, and concerts at venues from Moody Coliseum to the Paramount Theatre in Abilene to the Morton H. Meyerson Symphony Center in Dallas.
Starnes volunteered his time as a design, production and technical consultant for the West Texas Rehabilitation Center telethons and fundraising dinners, the Abilene Opera Association and the Abilene Preservation League, and as a visiting director for the Abilene Community Theatre. After retirement, he worked part time at The Hamil Family Funeral Home. In 2005-06 he was a member of ACU’s Centennial Photography Archivists Team.
He was preceded in death by his parents, Rufus and Willow Drue (Garner) Starnes; a brother, Rufus G. Starnes Jr. (’41); and two sisters, Elaine (Starnes ’48) Bryant and Yvonne (Starnes ’48) Smith. Among survivors are Beverley, his wife of 57 years; two sons, Robert Mac Starnes (’88) and Thomas Duncan Starnes; a brother, Mac D. Starnes (’58); and three grandchildren.