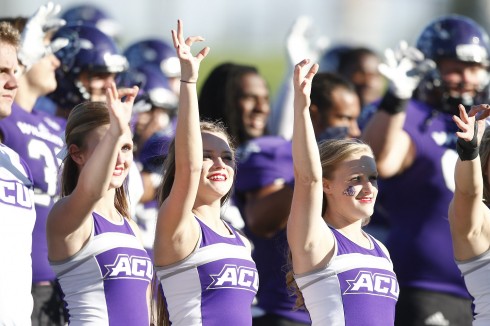 It’s taking a little longer than expected for students and some fans of Wildcat athletics to warm up to life in NCAA Division I, but the David vs. Goliath moments are coming fast and furious, and Abilene Christian University is winning its share of them.
Just by playing in the Southland Conference, ACU (Fall 2014 enrollment of about 4,400) is swimming in the deep end of the pool with institutions far larger, in most cases: all but Houston Baptist (2,198) have enrollments of from 8,000-15,000 students, with Sam Houston State the biggest at 19,214. Non-conference games offer the opportunity to challenge – and beat – even larger foes:


The women’s basketball team beat George Mason (33,917 • Atlantic 10 Conference) and Missouri-Kansas City (15,746 • Western Athletic Conference) in a holiday tournament this week. Head coach Julie Goodenough’s team is 5-1 in the early season, including a win in Moody Coliseum over Eastern Washington (13,453 • Big Sky Conference). Last season the team beat Texas Tech (35,134 • Big 12 Conference) in Lubbock and returns there Dec. 3 for a rematch. This season, the Wildcats have a home game with the Air Force Academy (4,619 • Mountain West Conference) and a road game at Kansas State (24,300 • Big 12 Conference).
The men’s basketball team is 2-2 thus far, with losses to Tulsa (4,597 • American Athletic Conference) and Duquesne (9,984 • Atlantic 10), teams with deep experience in NCAA March Madness tournaments and the NIT. Duquesne drew a crowd of 2,100 to Moody last week and although the Dukes won 102-81, the game marked the appearance of the most highly successful men’s program to play at ACU since the Wildcats upset Pepperdine (7,700 • West Coast Conference) in 1984. ACU’s non-conference schedule is not as daunting as last year (Maryland and Iowa of the Big Ten Conference, Xavier of the Big East Conference, St. Bonaventure of the Atlantic 10, and Towson of the Colonial Athletic Conference) but includes upcoming games with California-Riverside (21,297 • Big West Conference), Sacramento State (29,300 • Big Sky Conference), Houston (40,750 • American Athletic), Loyola University-Chicago (15,902 • Missouri Valley Conference), Boise State (22,003 • Mountain West) and South Carolina State (4,000 • Mid-Eastern Athletic Conference).
One win from the football team’s 6-6 season this fall came over Stephen F. Austin State, a Southland rival that qualified for the FCS (Football Championship Series) national playoffs. And in a game played Nov. 1 in the Metroplex, ACU upset Central Arkansas, knocking the Bears from first place in the Southland and spoiling their playoff plans. Earlier in the year, the Wildcats lost 38-37 in the final seconds to FBS (Football Bowl Subdivision) member Georgia State (32,842 • Sun Belt Conference) in a game televised nationally on ESPNU, and stunned Troy (23,290 • Sun Belt) with a 38-35 win Sept. 13 on ESPN3. Troy has made five appearances in bowl games in the past decade; the win was ACU’s first over an FBS opponent in 51 years. Three Wildcat losses in 2014 were by a total of 10 points.
In Spring 2014, the baseball team played Arizona State (76,771 • Pac 12 Conference), Arizona (36,932 • Pac 12), Texas Tech, Texas A&M (58,809 • Southeastern Conference), Oklahoma (30,786 • Big 12), Oklahoma State (25,708 • Big 12), Missouri State (22,731 • Missouri Valley Conference) and Utah (31,660 • Pac 12) in 2014. In 2015 the Wildcats play home games Feb. 13-15 against Nevada (18,227 • Mountain West Conference) and Feb. 24 with Texas Tech – the Red Raiders’ first baseball game at ACU since 1976 – and road games at Texas Tech, Texas-Arlington (33,311 • Sun Belt), Texas A&M, TCU (10,033 • Big 12), Arizona State and Arizona. Don’t miss games with Southland foes either; 18 players from universities in ACU’s conference were chosen in the MLB Draft this year. The Southland sent two teams to the NCAA playoffs in 2014 and is one of the strongest baseball conferences in the nation each year. ACU upset Arizona – the 2012 College World Series champ – 6-5 in its next-to-last game in 2014.
The volleyball team scored wins this fall over Jackson State (9,508 • Southwestern Athletic Conference) and Weber State (13,080 • Big Sky) and gained valuable experience in non-conference matches with Baylor (16,263 • Big 12), Portland (3,900 • West Coast), Texas-Arlington, North Texas (36,221 • Conference USA), Texas State (36,790 • Sun Belt), TCU, Texas Tech and Air Force.
The women’s soccer team would have qualified for the Southland tournament in each of the past two seasons had the Wildcats been eligible for it. They made a big splash in 2013 with a 13-5-1 overall record and 7-5 mark in the Southland, and followed that up with a 5-4-2 league record in 2014. Their non-conference opponents this fall included Tulsa, Texas-El Paso (23,003 • CUSA), North Texas, TCU, Texas-Pan American (20,053 • WAC), and Texas Tech. SFA, the Southland’s regular-season champ for 2014, narrowly beat ACU, 1-0, with a goal in the 82nd minute of play.
The tennis teams showed in Spring 2015 they could compete and dominate in the Southland. The women (18-6 overall and 9-3 in conference) and men (17-10 overall and 5-1 in conference) had big seasons, and the men won the postseason National Invitational Tournament in Omaha, Neb.
The men’s track and field team finished fourth in the Southland’s 2014 outdoor championship meet in May and the women’s cross country team was fifth in the league meet in November.
In Spring 2014, the women’s softball team split games with Rhode Island (15,800 • Atlantic 10), beat Texas-Arlington and took four of five games from Prairie View A&M (8,608 • SWAC). Their 2015 schedule includes games with Missouri State, Louisiana-Monroe (8,527 • Sun Belt), Louisiana Tech (11,271 • CUSA), North Texas, Oregon (24,548 • Pac 12), Tulsa, Baylor and Jacksonville (8,693 • Atlantic Sun Conference).
Because of the nature of multi-team tournaments and meets, facing off against student-athletes from much larger universities is nothing new to the track and field, cross country, tennis and golf programs, but the schedules make bigger headlines in sports such as football and basketball in which contests are frequently televised regionally and nationally.
The football team already has its biggest road games in years scheduled with Fresno State University (Sept. 5, 2015, in Fresno, Calif.) and Air Force (Sept. 3, 2016, in Colorado Springs, Colo.).
The Wildcats’ new track and field stadium will be christened April 11 when ACU hosts Texas Tech, TCU and New Mexico in the second annual Wes Kittley Invitational, the most high-profile quadrangular meet in Abilene since 1960, when Michigan, Ohio State and Texas squared off with ACU in Elmer Gray Stadium before a standing-room only crowd.
Stay tuned by following this blog and acusports.com for Wildcat action and news in Division I athletics. Most important of all, make plans to be present when ACU teams compete at home and on the road. There is no replacement for the energy and support fans can show their team, especially when there is history to be made.
PREVIOUS POST   NEXT POST
SHARE: