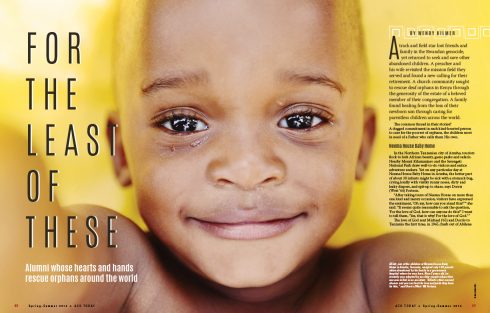 One of the feature stories in the Spring-Summer issue of ACU Today is “For the Least of These,” a look at several Abilene Christian University alumni involved in helping rescue orphans around the world.
The opening spread is an engaging portrait of Elliott, a youngster who spent most of his first two years of life at Neema House Baby Home, the Tanzanian ministry of Michael (’65) and Doris (West ’66) Fortson of Temple, Texas.
The image, as well as others there and in our online-only Bonus Coverage, is the work of Stina Granfors, a talented photographer from Gothenburg, Sweden, who volunteered there in Summer 2013.
Read our 21-page story online here or by clicking on the image above of Elliott.
In the weeks to come on this blog, we will introduce you to alumni who help make a real difference in the world by adopting and fostering children. For now, enjoy this essay from Dorris about Elliott and “trying to change the course of one precious life at a time”:

A Home for Elliott

Dreams do come true – sometimes. Two years ago a baby boy was left abandoned at the government hospital in Arusha, Tanzania. He was so tiny a wedding ring would slip easily off and on his arm or leg. Just a whisper of a baby, Elliott was not much to see, a little scrap of humanity that looked more tadpole than baby. Neema House Baby Home was called but knowing that he was too small to survive at 1.65 pounds, Elliott was left in a wire basket tray at the hospital to survive on his own. His bed at the hospital looked like the one baby Noah is living in now while we wait for him to get big enough to bring home.

Neema was just starting out then and we didn’t have a good camera so Elliott’s earliest pictures are just memories. No one thought he would live anyway, so why take pictures? But that undeniable spark of God Life in this little one just wouldn’t quit and for four months he fought to live. Abandoned by all who knew where he came from, from anyone who had ever had a dream of life for him, somehow Elliott survived.

We thought Elliott was a girl at first and had churches praying for baby Elizabeth. The nurses changed his diapers and he had a tiny slip of paper with the name “Elizabeth” in his bed, so of course we thought he was a girl. It was funny the day we found out he was a boy and we had to send out emails asking people to take Elizabeth off their prayer list and please put Elliott on!

Today, the dream of a life and a good home for Elliott has come true. Tammy Stansbury from Temple, Texas, and I visited last week in his new home with his proud mom who kept trying to get Elliott to perform and show us how smart he is today. He is 2 years old and can count to seven and is learning to write his name. His little face has filled out and he has a puppy. His new mom and dad have a nice home, not a mud hut with thatched roof, but a cement home with a porch and columns and windows with glass and a front door that locks. His mom and dad are a bit older; they had a son who worked as a mechanic in a garage and an engine fell on his chest and crushed him. Elliott is their second chance and you can feel the love and pride they have for him.

Neither Michael nor I can tell you how this makes us feel. My throat stops up and I just have to lift my hands skyward in praise to a Great and Mighty God who could take what evil meant for death and bring it to life and we get to be a witness to it: a life not expected to be lived, dreams not expected to come true but a God who does the unexpected. It doesn’t get any better than this.

I have just finished reading a book, “The Invention of Wings,” by Sue Monk Kidd. It’s the story of two young women, one bound in slavery but believing that in Africa her people could fly and  the other, a young woman enslaved just as tightly to her Southern culture also dreaming of flight and escape to a different life. Lucretia, her Quaker friend tells her one day, “We’re all yearning for a wedge of the sky aren’t we. I suspect God plants those yearnings in us so we will at least try and change the course of things. We must try, that’s all.”

As I read those words in Sue’s book, I thought of the dream of Neema House Baby Home, trying to change the course of one precious life at a time, just like Elliott and thinking that occasionally, we win. Most of the time we walk around thinking it’s all about us but it isn’t; we are not the center of anything. God has put us here to make a difference, to try and change things somehow, someway for the hurting and the hopeless of this world. The answer to the age-old question of “Why does God allow babies to starve in Africa?” is more often “He doesn’t, we do.” And he never told us to feed the millions, just one he said, just feed one, the one you know about, one cup at a time.