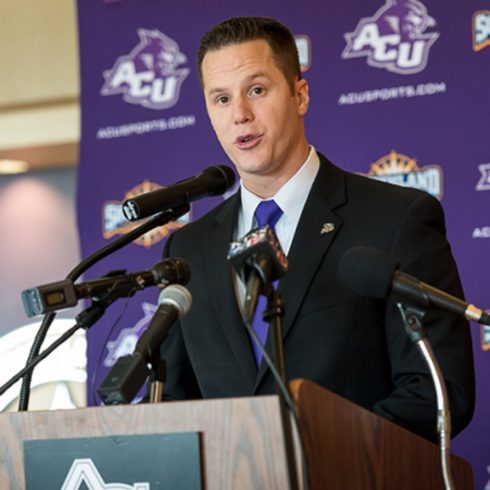 It’s been a dozen years since Abilene Christian University went “out of network” to hire a director of athletics, but it’s not as unusual as one might think for the Wildcats to lean on someone for that job who does not have a framed ACU diploma on the wall.
Lee De Leon was introduced to the public Thursday as only the eighth person to hold that position on The Hill and the third to have an undergraduate degree from somewhere besides ACU.
The first was A.B. “Bugs” Morris, just one year removed from his graduation at Texas A&M when ACU president Batsell Baxter hired him in 1924.
With duties as director of athletics and head coach of the football, basketball and baseball teams, Morris was a jack-of-all-trades and master of many. At the slight size of 5 foot 7 inches and just 150 pounds, he had quarterbacked the Aggies to a win in the inaugural (1922) Cotton Bowl, and played shortstop on its baseball team while leading the Southwest Conference in runs scored and hitting.
By the time he retired in 1969 from athletics administration to promote ACU’s A.B. Morris Athletic Fund, he had become a giant in his field and eventually was enshrined in four sports halls of fame.
ACU’s previous directors of athletics:

De Leon is 33 years old and since 2011, has been associate director of athletics for development and executive director of the Lobo Club at the University of New Mexico. He earned degrees from Notre Dame and Texas A&M, and brings athletics marketing and fundraising experience at four Division I universities – New Mexico, Arizona, Louisiana State and Houston.
He made a good impression yesterday while explaining that ACU athletics will be unyielding in its support of the faith-based education of ACU, unwavering in its support of student-athletes and unrelenting in its community engagement. De Leon said his personal goal is to “make an impact for Jesus Christ in college athletics.”
ACU president Dr. Phil Schubert said he believes De Leon is “a proven leader of people” whose experience will help the Wildcats “navigate the challenges and opportunities of the NCAA landscape.”
De Leon replaces Jared Mosley, who was recently named CEO and president of the Texas Sports Hall of Fame.