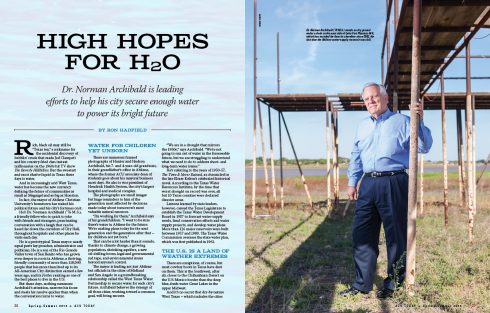 Rain the past two days in West Texas has fallen on some of the thirstiest ground around.
The wet-weather system – fueled in part by dying hurricane Vance (now a tropical storm) as it spins off the southwestern coast of Mexico and saunters ashore – is exactly what the doctor ordered to help fight a three-year old severe drought.
West Texas is dry by nature but climate forecasters say the current drought is the result of a combination of global warming, La Nina weather cycles and a slow “desertification” of the region, as explained in “High Hopes for H2O” in the Spring-Summer issue of ACU Today magazine.
Our story profiles the role Dr. Norman Archibald (’76 M.S.) is filling as mayor of Abilene and the city’s de facto evangelist on the subject of water supply acquisition and conservation. Archibald – known by many for his decade of roles in Student Life and in Advancement/Development at Abilene Christian University from 1981-91 – is leading the West Texas Water Partnership, a groundbreaking relationship between Abilene, Midland and San Angelo to secure water for each city’s future.
Archibald also is vice president of Hendrick Health System, Abilene’s largest hospital and medical complex.
Droughts in Texas don’t happen overnight, but they can shift into reverse gear in a surprisingly short period of time, as residents of the Panhandle were reminded in late September when a low-pressure system stalled over the area and created enough rain and runoff to cause Lake Alan Henry, one of Lubbock’s prime water sources, to rise more than 10 feet. Abilene’s rainfall this year is around 14 inches, about eight below normal. It will be several days before city officials learn how this week’s precipitation contributes to three area reservoirs on which it depends: Fort Phantom Hill, Hubbard Creek and O.H. Ivie.
But little will deter Archibald’s work toward securing a new surface water-supply lake 40 miles north of the city. The proposed Cedar Ridge Reservoir will cost some $240 million but when full, go far in creating water for the next generation of Abilenians as well as Archibald’s alma mater.
“We cannot believe that a big rain will answer all of our problems,” Archibald said late this summer, about two months before the city moved to Stage 2 of water conservation restrictions. “We need to pay for additional resources because we do not know when a drought will reoccur in West Texas.”
Abilene’s economy is a growing success story on several fronts. ACU’s $75 million Vision in Action initiative to construct three new science facilities and two on-campus stadiums is its largest building campaign in more than four decades.
That kind of development on campus and across the city takes water to meet today’s needs and into the foreseeable future. “We’re making plans today for the next generation and generation after that – for children yet born,” Archibald said.