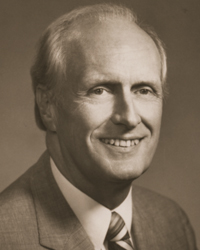 Former longtime Abilene Christian University trustee William F. “Bill” Hooten of Johns Creek, Ga., died Oct. 2 at age 88.
He was born Aug. 13, 1926, in St. Louis, Mo., married Joanne “Jan” Jeans on Aug. 1, 1949, and graduated from the University of Missouri School of Journalism in 1950. He served in the U.S. Navy from 1944-46 during World War II and for 18 months in the Army as a lieutenant during the Korean War.
Hooten’s career in the hardware-automotive retail and wholesale industry spanned 40 years. He worked his way from copy writer to corporate vice president and director of Western Auto Supply Co. Later, he was president of Liberty Distributors in Chicago before facilitating the merger of Liberty and Sentry Hardware Corporation into Distribution America, an organization of 4,500 hardware, lumber and building materials stores for which he served as president.
In 1991 he received the Leukens Leadership Award, the highest recognition of a distributor or manufacturer in the hardware industry.
After retirement from Distribution America in 1992, he and Jan traveled on several overseas assignments for International Executive Service Corps in which he was an advisor to developing- and emerging-market retail companies.
Hooten served as an elder in four congregations, including the North Atlanta Church of Christ. He was an ACU trustee for 29 years.
Among survivors are Jan, his wife of 65 years; a son, Bill Hooten III; daughters Marcy (Hooten ’76) Godfrey and Suzy (Hooten ’78) Brownlee; nine grandchildren; and four great-grandchildren.
Memorials can be made to ACU’s Jan and Bill Hooten Biblical Studies Endowed Scholarship (Gift Records, ACU Box 29132, Abilene, Texas 79699-9132).