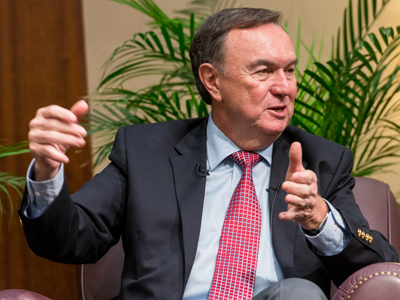 Mike Duke’s five years as CEO of Wal-Mart Stores Inc. capped a nearly 20-year tenure with the retail giant but his influence over its operations may far outlive him. Duke spoke about faith and business at Abilene Christian University on Tuesday as part of the Distinguished Speaker Series hosted by ACU’s College of Business Administration (COBA).
Duke, who is now retired, served on Walmart’s Board of Trustees; oversaw the logistics, distribution and administrative divisions; and was vice chair of Walmart International.
Dr. Rick Lytle, professor and dean of ACU’s COBA, interviewed Duke during Tuesday’s luncheon. Lytle spent the 2012-13 school year representing the university as a research fellow at the CEO Forum in Colorado Springs, Colo., and as a visiting marketing professional at Walmart headquarters in Bentonville, Ark., where he shadowed Walmart executives and joined them in strategy sessions. At the time, Duke was chair and CEO of the company.
Duke had 23 years of experience with Federated Department Stores and May Department Stores before joining Walmart. He has been on the Board of Directors of The Consumer Goods Forum, the executive committee of Business Roundtable and the executive board of Conservation International’s Center for Environment Leadership in Business. He also serves on the Board of Advisors for the University of Arkansas and the advisory board of the Tsinghua University School of Economics and Management in Beijing, China.