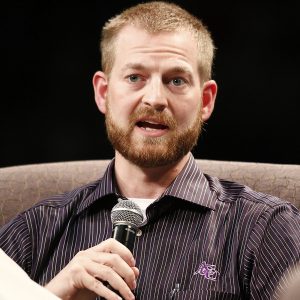 While this week’s developing news about a second diagnosis of Ebola in Dallas is worrisome to some Metroplex residents, the comments of local and federal health officials there are echoing what Samaritan’s Purse physician Dr. Kent Brantly (’03) said Friday at Abilene Christian University, his alma mater.
Nina Pham, a nurse among other healthcare workers who assisted with Thomas Duncan, the patient who died last week at Texas Health Presbyterian Hospital, has contracted the virus.
After his visit to ACU’s Homecoming this past weekend with his wife, Amber (Carroll ’06), Brantly was in Dallas on Sunday to donate plasma to Pham, a 2010 graduate of Texas Christian University, according to an ABC News report. On his way to Abilene a few days earlier, Kent stopped in Kansas City to do the same for video journalist Ashoka Makpo, who is hospitalized in Nebraska. Brantly said he was willing to do likewise for Duncan, but their blood types did not match.


“It’s a very serious disease for those who have it and for those who have come in contact with sick individuals. But I want to be very clear that for someone who is not in contact with a person who is sick with Ebola, there is no risk,” said Brantly, who while speaking at ACU described being “heartbroken” for Duncan and his family.
“For those children who were living in the household with Mr. Duncan when he was ill – before he was cared for in the hospital – the playmates and classmates of those children are not at risk, because those children were not sick when they last were around their playmates and classmates,” he continued. “For those people who are contacts of someone who is known to have Ebola, this is a very serious issue. We all need to be supporting those people, and those individuals need to be monitoring themselves and cooperating with the authorities and the CDC [Centers for Disease Control and Prevention).
Dr. Tom Frieden, head of the CDC, told NBC’s “Meet the Press” on Sunday that healthcare professionals know how to stop Ebola. “It’s not going to spread widely in the U.S. for two basic reasons. We can do infection control in hospitals and we can do public health interventions that stop it in its tracks,” he said. On Monday, however, Frieden said he would not be surprised if others – such as the reportedly 70 who were on the healthcare team for Duncan – tested positive for the virus.
Despite the developments in Dallas, Brantly told ACU audiences on Friday that the world’s focus should be on stopping the virus more than 5,000 miles from Texas.
“But the rest of us, we need to be praying for the people of West Africa, for the family members of Mr. Duncan and the other individuals in America who are being treated in Atlanta and Nebraska right now.” he said. “We need to be finding practical ways to help in West Africa, not worrying that because we live 100 miles from a hospital that treated a patient, that we’re at risk.”
Brantly said he cannot overstate the urgency of the international response to the Ebola outbreak in West Africa.
“What the United States and other nations have committed to doing is wonderful, but if it is not done in a timely manner, if it is not done immediately, it will be too little,” he said. “There is no magic bullet to stop the Ebola virus. It will take a multifaceted response. We need more isolation units. We need more medical personnel to staff those isolation units. We have to intervene now in the communities, in the villages, in the towns to stop the transmission of this disease from those who are infected to their caregivers. If the world does not respond adequately to this outbreak, we will all pay the price for it, but no one will pay a greater price than the people of West Africa.”
This morning, Dr. Bruce Aylward of the World Health Organization said 8,914 Ebola cases and 4,447 deaths had been reported to WHO thus far, although actual numbers are expected to be much higher. Aylward said that by December, 5,000 to 10,000 cases per week are anticipated in Liberia, Guinea and Sierra Leone.
Three thousand members of the U.S. military are participating in a $763 million American effort announced by President Barack Obama last month to take supplies to Liberia, where Doctors Without Borders and Samaritan’s Purse are providing expertise in treating patients. According to a report Sunday in The Washington Post, Liberia’s small native healthcare force is dwindling because physicians, nurses and aides have contracted the virus and died, or have become discouraged and left their jobs.
PREVIOUS POST   NEXT POST
SHARE: