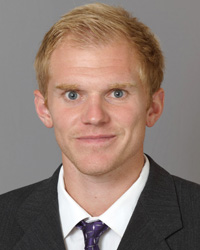 During his star-studded career as a distance runner in college, Drew Graham became known for amazing sprints from far back in the pack during cross country and track and field meets. Online videos of his races show a blond-haired young man repeatedly making thrilling runs – often on the back stretch of the last lap – to take the lead and cross the finish line ahead of everyone else.
Graham was named all-America 15 times during his four years at Adams State University in Alamosa, Colo., and his teams won NCAA Division II national titles in cross country in 2008, 2009 and 2010. A native of Newcastle, England, he was the Division II individual national champion in the 1500-meter run outdoors in 2011 and 2012 and in the indoor mile in 2012. Before enrolling at ASU, Graham was one of the top 800- and 1500-meter runners in England.
He is in his second year as assistant coach for cross country and distance events in track and field at as Abilene Christian University, one of Adams State’s fiercest rivals in those sports the past three decades.
Today, he is in a hospital in Aurora, Colo., fighting to recover from a serious accident suffered Sept. 20 while hiking with his wife, Laura. Graham’s C4 vertebra was damaged during a dive into a lake, and prompt action from Laura saved his life. He underwent emergency spinal surgery and is learning how to breathe again on his own, and to overcome other complications caused by his injury. He began working with physical and occupational therapy staff last week. Drew hopes to be transferred soon to Craig Hospital, a world-renowned facility in Denver for neuro-rehabilitation and research of patients with spinal cord and traumatic brain injuries. [UPDATE: Drew was moved Oct. 7 to Craig Hospital and is making excellent progress.]
You can follow his progress online here, and contribute to a fund to help with his medical expenses.
A world-class athlete in his own right, Graham has a strong will, sense of humor and fierce determination to overcome any adversity. He is in one of the toughest races of his young life, but inspiring others with his courage and drive to again return to coaching the sports and student-athletes he loves. No one who knows him would bet otherwise.