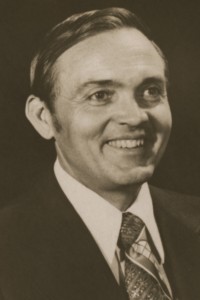 A memorial service was held this afternoon for 1951 Abilene Christian University graduate Delta “Jimmy” Jividen, 84, a longtime popular evangelist and author who died Thursday in Abilene.
Jividen was born Nov. 26, 1929, in Woodward County, Okla. He was Students’ Association president at ACU, where he met his wife, Shirley Jones (’54). The couple married June 30, 1951.
He earned a M.A. degree in New Testament from ACU in 1958, worked on a doctorate in religion at the University of Southern California from 1960-64, and taught Bible and Greek at York (Neb.) College, where he chaired the Bible department and served on the Advisory Board. Jividen was president of the ACU Alumni Association from 1975-76.
Jividen planted and/or preached in congregations in Texas, Oklahoma, Minnesota, Colorado, Nebraska, and California, and was minister to three in Abilene: Hillcrest Church of Christ, Baker Heights Church of Christ and Oldham Lane Church of Christ. He initiated The Discipleship Program at Hillcrest to mentor ACU students.
He authored 10 books – including Miracles: From God or Man?, More Than A Feeling: Worship That Pleases God and Alive in the Spirit: A Study of the Nature and Work of the Holy Spirit – and numerous journal articles. Jividen spoke at many Christian university lectureships and gospel meetings, and served on the board of Restoration Quarterly. During a 1973 tour of Europe, Africa and South America, he preached 70 times in 13 countries.
Jividen served as director of the Abilene Kiwanis Club and was known for his land management expertise, having been named Outstanding Rancher in 1989 for the Middle Clear Fork Soil and Water Conservation District.
He was preceded in death by his parents, Harvey and Ruby Jividen, and brothers Hubert Jividen, Gary Jividen and Marlin Jividen. Among survivors are Shirley, his wife of 63 years; a son, Steve Jividen (’74); two daughters, Diane (Jividen ’75) Huff and Debbie (Jividen ’80) McCoy; nine grandchildren; and 19 great-grandchildren.