It’s a little later than originally planned, but we wanted to be sure you received the most recent news about some exciting developments at Abilene Christian University.
Although it’s in the mail, you don’t have to wait for the Spring-Summer 2014 issue of ACU Today magazine to arrive. You can sneak a peak now at its 130 pages (84 from the printed issue and another 46 of Bonus Coverage you can only read online). 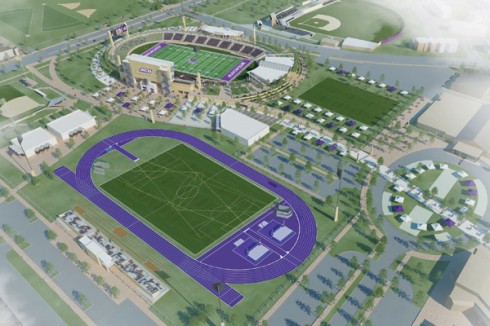 It’s been a busy spring and summer at ACU getting the Vision in Action (VIA) initiative started. It’s a massive project that will see three new science buildings and two stadiums built on the Hill – the most transformative growth in facilities since the Design for Development campaign built Moody Coliseum, Brown Library, McGlothlin Campus Center, Don H. Morris Center and other landmarks in the 1960s and 1970s. The $75 million initiative began with the announcement in February of $55 million in gifts, including an ACU-record $30 million from Mark (’86) and April (Bullock ’89) Anthony of Dallas.


VIA coverage in ACU Today includes a look at the latest architectural renderings for the Robert R. and Kay Onstead Science Center, Halbert-Walling Research Center and the two stadiums, which are in some cases a good bit different than those you may have seen back in February. Wildcat Stadium will allow home football games to be played on campus for the first time in decades. There also are profiles of major donors, details about the five building projects, and some fascinating history. Other major stories this issue:

Watch this blog in the days to come for backstories of some of these major articles in the new issue.
View the new online issue