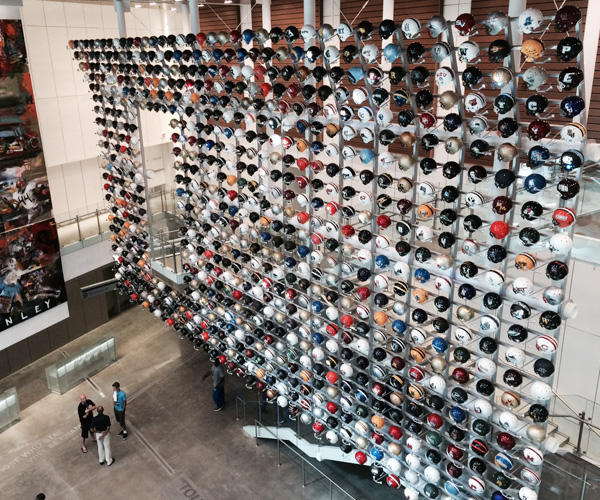 While in Atlanta recently for the football game with Georgia State University, some Abilene Christian University fans had the opportunity to tour the new College Football Hall of Fame, which was recently relocated from South Bend, Ind., and re-imagined in a media-rich, state-of-the-art venue that has wowed visitors.


A Wildcat helmet is one of 768 displayed in The Quad on the Helmet Wall Presented by Southwest Airlines. The Hall of Fame also includes a 45-yard-long playing field for testing fan skills, and many interactive and augmented reality displays designed to engage visitors in the Game Day experience; celebrate accomplishments of players, teams and coaches in a one-of-a-kind museum; and relive memorable plays from college football history. The College Football Hall of Fame and museum is on Marietta Street N.W., adjacent to Centennial Olympic Park and the Georgia World Congress Center.
Former ACU running back Wilbert Montgomery (’77) is featured in one of the exhibits. Montgomery, who is beginning his 27th year as a player or coach in the National Football League, was inducted in 1996 when the Hall of Fame began to add players and coaches from college-division universities. He was in the first class of honorees, which included Louisiana Tech University quarterback Terry Bradshaw, Jackson State University running back Walter Payton, Jim Youngblood of Tennessee Tech University, Neil Lomax of Portland State University and Buck Buchanan of Grambling University, among others.
Today, Montgomery is the running backs coach for the Cleveland Browns. He played nine seasons in the NFL (eight with Philadelphia, one with Detroit) before beginning his career as an NFL assistant coach in 1997 for Rams’ head coach Dick Vermeil, his former head coach with the Eagles. The Rams won Super Bowl XXXIV over the Tennessee Titans and advanced to Super Bowl XXXVI, losing to New England. Montgomery coached running backs for the Super Bowl XLVII-winning Baltimore Ravens. During his playing career, Montgomery set Philadelphia Eagles rushing records for a career (6,538 yards) and season (1,512 yards in 1979), earned all-pro honors and played in the Pro Bowl. He led the NFC in kickoff returns as a rookie in 1977 and the NFL in all-purpose yards in 1979. He helped the Eagles to Super Bowl XV after the 1980 season, and Montgomery was a member of the inaugural class of the Eagles Hall of Fame. A native of Greenville, Miss., Montgomery led ACU to the 1973 NAIA Division I national championship.