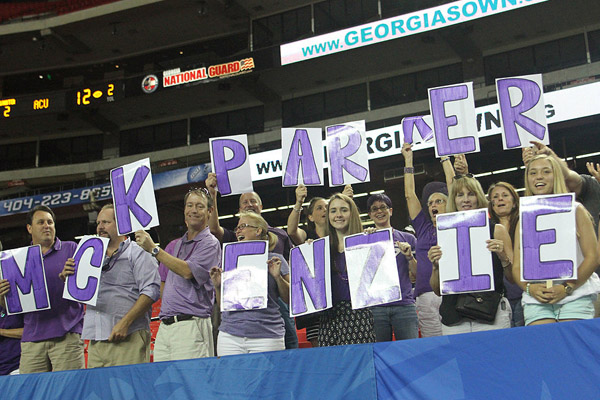 The Abilene Christian University Wildcats didn’t play football this past weekend, but only because they opened the season with a rare midweek game last week. They’ll be on national or regional TV four more times this season but won’t have the captive audience it had Aug. 27 when their matchup with Georgia State University was the only college football game being played, much less broadcast on ESPNU.


Head coach Ken Collums’ team came four seconds short of making it a memorable one when GSU kicker Wil Lutz booted a 24-yard field goal at the end of the game to spoil a 37-35 Wildcat lead and give the Panthers a 38-37 win. Still, it was a memorable experience to play on national TV in the sports history-rich Georgia Dome, site of the SEC football championship, the Chick-Fil-A Bowl and several NCAA men’s basketball Final Four games.
Sophomore quarterback Parker McKenzie had his own cheering section and the native of Georgia gave his fans plenty to be excited about, completing 30 of 40 passes for 403 yards and four touchdowns in his first college start. That was good enough to be named Southland Conference Offensive Player of the Week and represent the best passing performance of any first-time Wildcat starter in ACU history.
A pass he completed to senior wide receiver Demarcus Thompson in the second quarter of the game (see inset) was No. 6 on SportsCenter’s Top 10 Plays of the day. Thompson had a career day as well, catching nine passes for 156 yards and a touchdown.
ACU alumni, friends and family gathered before the game for a tailgate sponsored by the ACU Alumni Association.
The Wildcats open their home season this Saturday at 6 p.m. when they host Northern Arizona University at Shotwell Stadium.