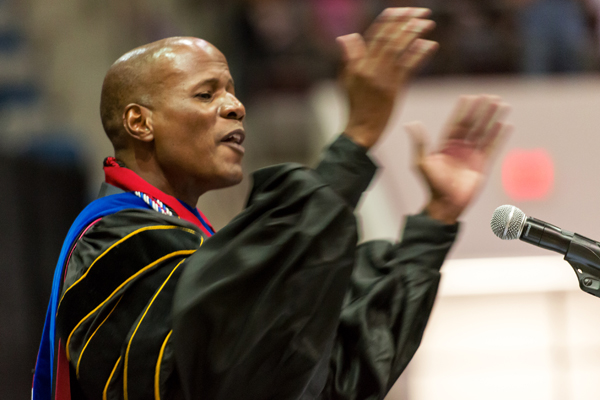 Dr. Steven Moore, associate professor of language and literature, was the featured Commencement speaker Aug. 8 in Moody Coliseum at ACU. A native of Prince William, Va., he earned a bachelor’s degree from the University of Wisconsin in 1994, and a master’s (1996) and doctorate (2007) from the University of Nebraska. Moore was named ACU’s Teacher of the Year in 2004 and annually is one of the most popular professors on campus for the energy he brings to his classroom, which as his students know, can just as easily be a local restaurant or the Abilene Zoo or a missile silo as a more conventional venue.

As professor of American literature, I read numerous novels and short stories. I experience vicariously the diverse circumstances that have shaped the characters’ lives and am intrigued by the varied outcomes. However, tonight I want to celebrate your stories.  The astonishing, heart warming and moving stories of this graduating class inspire me. Tonight we celebrate those of you who never gave up on your dreams, and we look forward to the impact that you will have.
Sometimes it is hard to be optimistic about our futures because we live in very difficult times. We live in a stifling environment that is in serious economic decline; people are losing their jobs and their homes; and our country is bitterly and ruthlessly fighting against each other debating such issues as immigration, gun control, race, and gender.
We live in a world where there are brutal and senseless wars in countless lands; we live in a world where dusty bodies travel to lands of early graves because of the scarcity of food, clothing and shelter; we live in a world where incivility is walking hand in hand with apathy; we live in a world where greed is walking hand in hand with power. And we wonder why countless faces no longer believe in love, peace,and hope. However, as Christians we should not give up.
Philosopher and social critic Cornel West said, “… as Christians what we are required to do is to just love our neighbor, which means love especially the least of these – which means give their situation priority – which means talk about our present situation as a matter of national and international emergency in the sense of urgency so that the love takes the form of both thought as well as deeds and to bear witness.”
Since these are urgent and desperate times, we need Christians who are going to bear witness by showering their workplace, by showering their neighborhood, by showering their communities with the radical love of Christ, the kind of radical love that fights for the oppressed, the kind of love that fights for those who are powerless, and the kind of love that fights for what is right! 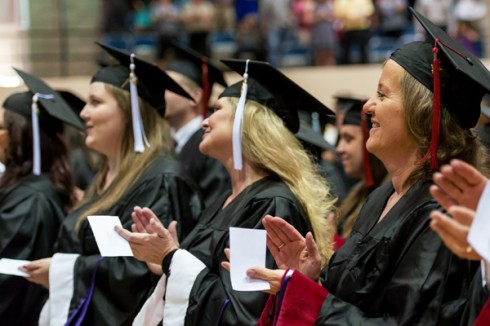 To the future CEOs, future professors, future artists, future writers, future theologians, future politicians, future scientists, future judges, future lawyers, future doctors, future nurses, future firefighters or whatever your calling may be: do not become cynical about the difficult times we are living in.
Instead, shower down the love of Christ in radical ways. There is a drought among us, and people are thirsting for love and kindness.
Pray for God to send you to those places where you will become a refreshing rainfall of change.
Pray for God to lead you to cities and towns – near and far – where you will become a reviving rainfall to those souls who are weary and exhausted.
Pray for God to carry you into arenas of disastrous disputes and convoluted challenges where you will become a revitalizing rainfall of wonderful hope and beautiful love.
My dear graduates: Since you all are glorious rainmakers, pray for rain and start carrying your umbrellas because this world is tired of this drought.
Carry your umbrellas and expect God to perform awesome miracles in your future careers.
Carry your umbrellas in the street, in your home, on your job, all alone, and in every hi-way and bi-way!
Carry your umbrellas and expect God to send the rain.
Congratulations on this phenomenal achievement!