Home/ ACU News/ Academic News/ New VA secretary faces a tough challenge
Main Content
Features Academic News Alumni News Campus News ACU Online All Categories
Academic News ACU News ACU Online ACU Remembers Alumni News Campus News Faculty Spotlights Features Graduate Programs Research Sports Student Experience Student Spotlights Student Success Undergraduate Programs Why ACU?
Editor’s note: Dr. Rick Lytle is professor of marketing and dean of ACU’s College of Business Administration. We asked him to offer some reflections on Bob McDonald, retired president and CEO of Procter & Gamble, who was approved this week to lead the U.S. Department of Veteran Affairs. McDonald was on campus last fall to speak to COBA students.
On Tuesday, retired Procter & Gamble president and CEO Bob McDonald was approved as the new Secretary of the U.S. Department of Veteran Affairs. We know a little something about McDonald, who visited Abilene Christian University in November 2013 as the featured guest of a Distinguished Speaker Series luncheon sponsored by our College of Business Administration (COBA).
This annual speaker series – which will continue Oct. 14 when former Walmart CEO Mike Duke joins us – is an important event for COBA. As dean of that college, I look for men and women of character who have proven themselves in the marketplace as business leaders who reflect Christ by serving others.
I want our business majors – and the broader business community in Abilene – to have the opportunity to meet such people, get to know them, and hopefully be inspired by what they have to say. Some of them are colleagues I have met while serving on the board of the CEO Forum, an organization composed of more than 150 Christian CEOs from major corporations around the world.
In this new role, McDonald takes over a massive agency plagued by allegations of chronic mismanagement, stifling bureaucracy and – worst of all – delays to medical care promised to men and women who have served courageously in our armed forces. As he promises to right a ship that’s badly off course, I am reminded of words his recollections of serving as a West Point cadet. He spoke about the prayer he and his classmates were called on to daily recite:

“That prayer had a collection of words in it that was always very powerful, and I’ve tried to live my life by it: ‘Help me to choose the harder right rather than the easier wrong.’ I always thought there was a very powerful idea – the idea that if you’re doing something and it feels like it’s too easy to do, it might be the wrong thing.”

McDonald reminded us that business leaders are sometimes tempted to take shortcuts to trick colleagues into thinking key goals are being reached. “The harder right is to resist doing that kind of thing,” he warned. Now, as he heads to this new role in Washington, D.C., we’re learning more from media reports that VA staffers falsified schedules and manipulated data to hide delays so it would appear they were hitting their target goals. 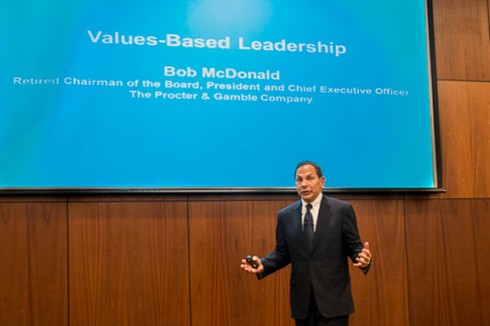 Is he the right leader to reverse such behavior in a large government organization? Time will tell. But we were impressed to hear McDonald tell our students, “I think the fundamental values that were implanted in me by my parents are the Christian values, the biblical values, and I think those values are the foundation of everything in our life.”
He also spoke last November about his appreciation for ACU – for the way this university trains “leaders of consequence and character – leaders of values.” He talked about meeting students who exhibit strong leadership skills and demonstrate “the willingness to march to a different drummer, to say the unpopular thing, to do the harder right versus the easier wrong.”
Those are the kind of young people we need marching out into the world – and the kinds of leaders we need in all walks of life, from government officials in our nation’s capital to business entrepreneurs of the smallest startups. Bob McDonald has a tough assignment but from what I have seen and heard, he brings the right mix of values and experience to the challenge.
Here are excerpts of an interview he did while on campus last fall: