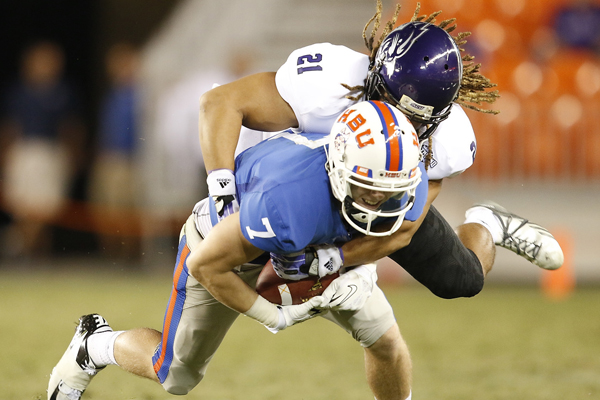 Abilene Christian University’s second full season as a member of NCAA Division I begins in only six weeks when the Wildcats travel to Atlanta to play Georgia State in a Wednesday night game on Aug. 27 in the Georgia Dome.
It will be the first college football game of the 2014 season involving a FBS (Football Bowl Subdivision) team. GSU is in its first year as a FBS institution in 2014, while ACU has a FCS (Football Championship Subdivision) program.
Four games in 2014 will be televised: Georgia State on ESPNU, Troy and McNeese State on ESPN3, and Incarnate Word on the Southland Conference Television Network as the league’s Game of the Week.
Tailgate parties are being planned by the Office of Alumni Relations  for the Georgia State, Houston Baptist and Incarnate Word games, so watch the Alumni Relations website for details as the date for each approaches. Make your plans to catch the Wildcats in action (all times Central Standard):