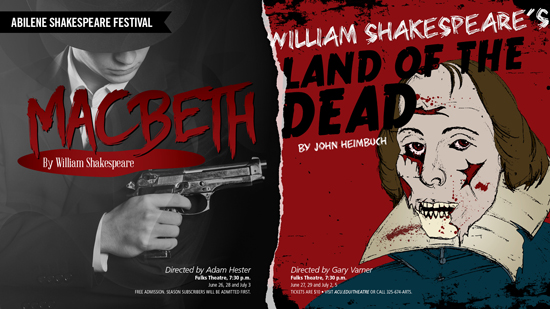 “The time has been that when the brains were out, the man would die, and there an end. But now they rise again …”
Macbeth was not speaking of zombies when he delivered this line in William Shakespeare’s famous play – but he could have been.
That’s essentially the premise of William Shakespeare’s Land of the Dead, a humorous twist on the typical summer performances of the Abilene Shakespeare Festival, which wraps up this weekend.
This year’s shows – Land of the Dead and Macbeth – share that line in common, among the many famous Shakespearean turns of phrase Land of the Dead adapts for its dialogue. The play is set entirely in Shakespeare’s Globe Theatre, where the famed playwright, Francis Bacon, top actor Richard Burbage, Queen Elizabeth and her retinue have barricaded themselves against the terror and chaos that “the affliction” has visited upon London at the turn of the 17th century. Besides the zombies, the characters also must navigate the tensions within the theater – particularly between Shakespeare and his actors, and between the queen and her advisers.
Directed for the Abilene Shakespeare Festival by professor of theatre Gary Varner, Land of the Dead was written for the 2008 Minnesota Fringe Festival, where it became a hit and garnered rave reviews.
The other, ahem, thriller this week is Macbeth, directed by Adam Hester (’77), professor and chair of theatre. The production – which chronicles the descent of a heralded Scottish general into murder and madness – comes with a twist of its own: Although hewing closely to the Old English of the original, the script replaces 1000s Scotland for 1930s Brooklyn and substitutes kings for mob bosses. The performance stars in the title role Josh Blann (’00), associate professor of drama at Tarrant County College-Northwest and a member of the Actors’ Equity Association – marking the second consecutive year the Abilene Shakespeare Festival has included a professional Equity actor, said Dawne Swearingen Meeks (’95), associate professor of theatre.
“It’s wonderful training for our students to work alongside an equity union professional,” she said. “It also will allow us to eventually hire a union stage manager so our students can start earning points towards their union status. … We are thrilled for this opportunity!”
Several actors perform double duty during the performances. Among them: Jacob Alexander, senior acting major from Vestavia Hills, Ala. (Macduff, Macbeth’s nemesis, and Shakespeare); Miranda West, senior musical theatre major from St. Louis, Mo. (Lady Macbeth and Kate, the Globe’s costume designer); Ben Starkey, junior theatre major from Garland (Banquo, Macbeth’s friend, and Burbage, who co-owned the Globe and starred in many of Shakespeare’s plays) and Kari Hatfield, assistant professor of theatre (Lady Macduff and Queen Elizabeth).
William Shakespeare’s Land of the Dead will be Wednesday, July 2, with a talkback session immediately afterward, and Saturday, July 5. Tickets are $10 each. Macbeth will be Thursday, July 3; admission is free, with a talkback session afterward. All performances begin at 7:30 p.m. in Fulks Theatre of ACU’s Williams Performing Arts Center, and doors open at 7 p.m.