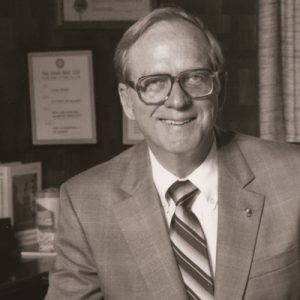 Former Abilene Christian University trustee John Clarence “Jay” Brockman (’49) of Angleton died May 22, 2014, at age 86.
J.C. was born Dec. 7, 1927, in Houston and graduated from Boling (Texas) High School in 1945. Brockman served as a master sergeant in 1946-48 during World War II. He left college in Abilene to come back to Brazoria County to help with the family clothing business in West Columbia.
Brockman married Roberta Gray Niblack (’49) in 1949 in Lubbock. He was president of Brockman’s Stores from 1954 until becoming board chair in 1982. Involved in the church and community his whole life, he was a elder, president of the Texas Retailers Association, a trustee on Angleton ISD school board, and a commissioner for the Port of Freeport. He served as president of the Angleton Chamber of Commerce, the Brazoria County United Way and the Angleton Rotary Club, where he never missed a meeting in 56 years. He was a member of ACU’s Board of Trustees from 1977-92.
He was preceded in death by his parents, John Creel and Willie Grey Brockman; two sisters, Mary Louise (Brockman) Haggard and Eleanor (Brockman ’42) Barton; and a great-grandchild, Eli Case Bouse.
Among survivors are his wife of 65 years, Roberta Gray “Perk” Brockman; two sons, John Brockman (’72) and Mac Brockman (’76); two daughters, Mollie (Brockman ’74) LeMoine and Sara (Brockman ’80) Bouse; 10 grandchildren; six great-grandchildren; and a sister, Billie (Brockman ’51) Arnold.