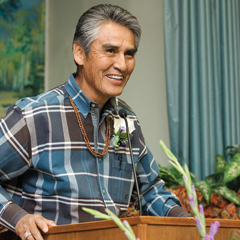 This week is the anniversary of the Indian Citizenship Act, legislation signed into law by President Calvin Coolidge on June 2, 1924, granting rights to all Native Americans born within the territorial limits of the United States.
Ninety years later, a notable beneficiary is Abilene Christian University alumnus Dr. Joe Shirley Jr. (’73), who recently became a candidate again for president of the Navajo Nation, running for an unprecedented third term of office.
Tribal law prohibits a person from serving more than two consecutive terms, as Shirley did from 2003-11 when he became the Navajo’s only two-term president. But it does not exclude a former president from sitting out an election cycle to run again. Ben Shelly, the current Navajo president, was Shirley’s vice president from 2007-11. Only six men have served as president since the tribal government was restructured in 1991. Before that, the Navajo were led by a chairman.
With more than 300,000 enrolled members, the Navajo are the largest of the 566 federally recognized Native American tribes, and live on more than 27,000 acres of land in Arizona, New Mexico and Utah. Shirley and his family reside in Chinle, Ariz., where he is an Apache County supervisor.
Shirley has a distinguished career in social work. He majored in business at ACU, with minors in Bible and English. He earned a master’s degree in social work from Arizona State University and an honorary doctorate from Northern Arizona University. He received ACU’s Distinguished Alumni Citation in 2007.
He served on the Navajo Nation Council from 1986-99, including as chair of the Labor and Manpower Committee, the Advisory Committee, the Tax Commission, and the Ethics and Rules Committee. In 1996, he was appointed to the Board of Directors of the National Association of Counties in Washington D.C., which represents more than 3,000 counties throughout the U.S. In 1997, he served as a member of the Advisory Committee to the President’s Commission of Sustainable Communities in Washington, D.C., and from 1985-91, was a member of the Public Lands Committee. He was appointed by Native American leaders to co-chair the Bureau of Indian Affairs’ Tribal Budget Advisory Council and the Sovereign Protection Initiative.
Shirley’s academic and professional background provides unique insights to the socioeconomic challenges the Navajo face in today’s world. Historically, reservations have some of the lowest employment rates in the U.S., and struggle to attract private enterprise and investment.
Navajo Code Talkers were the unsung heroes of World War II, when U.S. forces utilized them from 1942-45 to communicate in a language that Japanese forces could not intercept and interpret successfully. The innovative strategy began with 29 Navajo Marines and eventually grew to about 500.