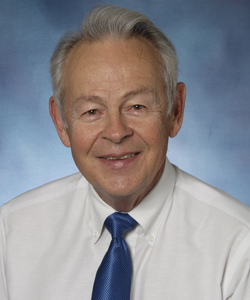 Earlier this month, longtime Bible faculty scholar Dr. Tony Ash (’59 M.A.) became the most recent Abilene Christian University graduate to receive the Distinguished Christian Service Award from Pepperdine University.
The presentation was made May 1 in Malibu, Calif., at the 71st annual Pepperdine Bible Lectures, for Ash’s work as an “inspiring Bible professor, mentor of university students; specialist in C.S. Lewis, minister, author, and former director of the Pepperdine Bible Lectures.”
Ash has taught at ACU since 1962. He earned a bachelor’s degree from Florida State University in 1956, a master’s degree from ACU in 1959 and a Ph.D. in church history from the University of Southern California in 1966. He has lectured on many university campuses and preached for hundreds of churches around the nation. His books include Decide to Love, Pray Always: What the New Testament Teaches About Prayer, and commentaries on Luke, Acts, Jeremiah, Lamentations, and other books of the Bible.
Episodes of Ash’s upcoming 10-part video series, Jack & Me: What C.S. Lewis Means to Me, were shown at the Lectures. The series was filmed on ACU’s campus and in Oxford, England, where Lewis taught for years at Oxford University’s Magdalen College and died in 1963.
Pepperdine’s Distinguished Christian Service Award was created to honor professors, ministers, missionaries and other church leaders from within Churches of Christ who have given their lives in service to the cause of Christ. Another ACU alumnus – Randy Hall (’73), senior minister for two decades of the Campbell (Calif.) Church of Christ – also received the same award from Pepperdine, but a day earlier at the university’s Lectures, which ran April 29 – May 2.
Ash and Hall  join other former recipients of Pepperdine’s award with ACU connections, including Dr. Carisse Berryhill, Dr. Everett Ferguson (’53), Dr. John C. Stevens (’38), Dr. Neil Lightfoot, Dr. Carl (’52) and Smitty (Smith ’94 M.S.) Brecheen, Dr. Paul (’52) and Gladys (Shoemaker ’52) Faulkner, Dr. John (’55) and Evelyn (Forrest ’56) Willis, Dr. Royce (’64) and Pam (Handy ’65) Money, Dr. James (’64) and Carolyn (Roberts ’65) Thompson, and Dr. Charles (’68) and Judy (Bailey ’69) Siburt.