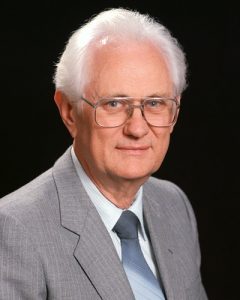 Dr. Floyd W. Dunn (’44), professor emeritus of chemistry and one of the first Graduate School deans at Abilene Christian University, died May 26 in Abilene at age 93.
Visitation is at Elliott-Hamil Funeral Home (542 Hickory St., Abilene, Texas 79602) on Sunday from 4-6 p.m. A memorial service will be held at 2 p.m. Monday in the Chapel at University Church of Christ.
Dunn was born Dec. 15, 1920, on a family farm in Dayton, Ark. He hitchhiked from Conway, Ark., to Abilene in 1941 to attend ACU, where his brother, Frank, was enrolled.
Following a year as a business major, he took an interest in biology during a class taught by Dr. Paul Witt (’22), patriarch of the science program at Abilene Christian. Witt’s influence proved far-reaching in Dunn’s life: he later changed his major to chemistry and married Witt’s daughter, Pauline (’44) on Oct. 27, 1944. Floyd and Pauline met in a voice class of Dr. Leonard Burford (’25), and later entertained troops at nearby Camp Barkeley during World War II with her piano skills and his singing.
The Dunns moved to Boulder where he earned a M.S. degree from the University of Colorado in 1946 and a Ph.D. degree in biochemistry in 1950. He was the first ACU graduate to earn a bachelor’s degree and doctorate in chemistry. The couple returned to Abilene in 1946 so he could begin a more than three-decade-long career teaching chemistry at Abilene Christian.
He began the university’s first research program in chemistry and was the first faculty member to receive research support from outside granting agencies. He assisted Dr. Fred J. Barton (’37) in organizing ACU’s Science/Math Research Fund, serving as dean of research and chair of the ACU Research Council, and chair of the Health Professions Advisory Committee. Among Dunn’s students were Dr. Tommy McCord (’54), Dr. Alvie Davis (’55), Dr. Don Lewis (’52) and George W. Knight (’55), who went on to become ACU chemistry professors. Knight became a groundbreaking inventor and research scientist for Dow Chemical Company.


While on academic leave from ACU, he began a decades-long relationship with institutions of higher education in Thailand. From 1958-59 he served as a consultant at Chulalongkorn University in Bangkok with a team from The University of Texas. Many of the Thai institution’s lecturers studied with Dunn from 1963-65 when he was professor of biochemistry for the University of Tennessee Medical School. From 1965-68, the University of Illinois assigned Dunn to teach biochemistry in Chiang Mai, where Thailand’s first medical school outside of Bangkok was established.
When Dunn returned to Abilene in 1968, he began to befriend and act as academic advisor to Thai graduate students who would eventually number more than 200 at ACU. Floyd and Pauline provided a home away from home for many of them. “I have seen some Thai students come to ACU and become Christians because of it,” he once said. “There is nothing more rewarding than knowing your work can in some way bring people to Christ.”
Dunn served as full-time dean of ACU’s Graduate School from 1972-84, succeeding Barton in the role, and retired in 1986.
In 1996, Dunn was named Commander of the Most Noble Order of the Crown of Thailand, and an honorary doctorate from Chiang Mai University in 2005, presented by Princess Maha Chakri Sirindhorn. A library at that university bears his name, as does the Dunn Conference Room in ACU’s Foster Science Building.
He was preceded in death by his parents, Fred and Mae (Waters) Dunn; two brothers, Frank Dunn (’40) and Harold Dunn; and a sister, Anita Knowles. Among survivors are Pauline, his wife of 69 years; two daughters, Shirley Dunn (’70) and Nina (Dunn ’75) Dikin; a son, James Dunn, M.D. (’71); three grandchildren; and one great-grandchild.
In lieu of flowers, the family encourages memorials to be made online to the Paul C. Witt Endowed Scholarship or the Floyd and Pauline Dunn International Scholarship at ACU (or mailed to Gift Records, ACU Box 29132, Abilene, Texas 79699-9132).
PREVIOUS POST   NEXT POST
SHARE: