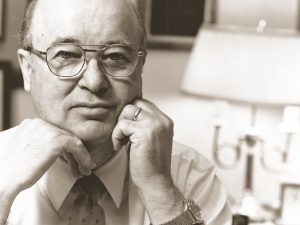 L.D. “Bill” Hilton (’48), whose 57-year administrative career spanned service to four presidents at Abilene Christian University, died May 13, 2014, in Abilene at age 88.
A memorial service will be held Friday, May 16 at 10:30 a.m. at Hillcrest Church of Christ, conducted by Hamil Family Funeral Home, with burial at 2 p.m. in the Texas State Veterans Cemetery at 7457 West Lake Road in Abilene. Visitation with the family will be 6-7:30 p.m. tonight at the church building.
Leo Dale “Bill” Hilton was born Sept. 23, 1925, in Rocky, Okla., and graduated from Rocky High School in 1942. He served with the U.S. Army Air Force in the South Pacific from 1943-46 and married Alvah Jean Henderson (’47) of Waco on March 31, 1947.
He graduated from ACU in 1948 with a B.S. degree and earned a M.Ed. degree from Hardin-Simmons University in 1952. He received an honorary doctorate from Amber University in Dallas in 1990, and also attended Oklahoma State University.
Hilton was a teacher and coach at Bayfield (Colo.) High School and worked in the business and sales departments of Meggs Company and Montgomery Ward before beginning a legendary 57-year administrative career at Abilene Christian University, where the Hilton Room (1991) and Hilton Food Court (2007) in the McGlothlin Campus Center were later named in his and Alvah Jean’s honor.
He began work at Abilene Christian in 1950 as instructor of business administration and accounts payable clerk. He went on to become assistant bursar (1952), assistant professor of business administration (1956), assistant business manager, business manager (1969), vice president of finance (1970), vice president of finance and administration (1990), and vice president (1992). He was named vice president emeritus in 1992 and officially retired in 2007 as vice president emeritus for finance and administration.
“Bill inherited the work Lawrence Smith (’29) did for years as bursar of the university,” said president Dr. Phil Schubert (’91). “That transfer of knowledge and expertise from one respected business leader to another helped make Abilene Christian a financially sound institution and ensured the success we enjoy today, especially in our endowment. He secured our growth from a small college in West Texas to a university respected around the world.”


Hilton created ACU’s first financial aid program for students; started a credit union, retirement fund and annual performance review program for faculty and staff; and made financial arrangements for landmark estate gifts to the university. Late in his career, he oversaw ACU’s investments in ranches and petroleum assets.
“Bill will go down in ACU history as one of those select few individuals who not only spanned several decades of distinguished service to the university, but more importantly, as one of a handful of key people who is responsible for the current strength and reputation of ACU,” said chancellor Dr. Royce Money (’64). “He was behind the scenes most of the time, but his keen financial mind and deep sense of stewardship made all the difference.”
“Sitting together with him in many meetings, I came to see him not only as a chief financial officer, but as a faithful steward of the university’s resources,” said vice president Dr. Gary McCaleb (’64). “His financial acumen, combined with unimpeachable integrity, was extremely reassuring when important decisions were being made.”
His civic roles spanned coaching Eastern Little League baseball and election to the Abilene City Council (1980-83). He also was a board member of the Taylor County Chapter of the American Red Cross, and excelled in various leadership roles for the Abilene Civitan Club, Texas District of Civitan International, the City of Abilene’s Board of Adjustment and its Planning and Zoning Commission, the Education Committee of the Abilene Chamber of Commerce, Abilene Christian Schools’ Board of Trustees and its PTA, the Abilene Christian High School Booster Club and Chorus Parents Club, and the Abilene Higher Education Authority.
Hilton served as a deacon at Graham Street Church of Christ, and a deacon and elder at Hillcrest Church of Christ, both in Abilene.
He was preceded in death by his parents, Robert and Bernice Hilton; a sister, Vashti McColum; and a granddaughter, Morgan Elizabeth Hilton. Among survivors are Alvah Jean, his wife of 67 years; two daughters, Mary Alice (Hilton ’70) Horne and her husband, Clint, of Houston, and Lou Ann (Hilton ’94) Riley and her husband, John (’86), of Glasgow, Kentucky; two sons, Bobby Hilton (’74) and his wife, Nancy (Rutherford ’75), of Nederland, and Don Hilton (’79) and his wife, Sheila (Booker ’79), of Abilene; grandchildren Jennifer and Regan Baker, Shane Hilton (’01), Brady (’07) and Stephanie (Maycock ’07) Hilton, JuliAnne and Heath Huston (’08), Marissa (Hilton ’09) and Caleb (’09) Northrup, Rebecca (Riley ’06) and Brock Button, Rachel and Michael Martin, David and Jenny Riley, Pam and David Quill, and Missy and Hollis Millikin; and 12 great-grandchildren.
Memorials may be made online to the L.D. “Bill” and Alvah Jean Hilton Endowed Scholarship at ACU (or mailed to Gift Records, ACU Box 29132, Abilene, Texas 79699-9132), the General Scholarship Fund at Abilene Christian School (2550 N. Judge Ely Blvd., Abilene, Texas 79601), and the Zambia Medical Mission Fund (P.O. Box 3393, Abilene, Texas 79604).
PREVIOUS POST   NEXT POST
SHARE: