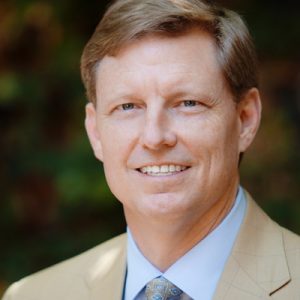 Each time James “Jim” Orr walks across campus, he’s potentially retracing a lot of family footprints along the way. Four generations of them, in fact.
The 1986 accounting graduate was announced today as Abilene Christian University’s new vice president for advancement, inheriting a key role in the development and funding of his alma mater’s growth strategies for its second century.
An experienced attorney who has served as an ACU trustee since 2002, Orr will lead a team of professionals in fundraising, alumni and university relations, university events, and the ACU Foundation.
He founded, along with Blair G. Francis (’75), the firm of Francis & Orr LLP in 1994, now known as Francis, Orr & Totusek LLP, with offices in Dallas and McKinney, Texas. Orr concentrates his practice in commercial and business litigation with an emphasis on healthcare, banking and creditor’s rights. In addition to appearing before numerous district courts throughout Texas, he also has presented cases before the Texas Supreme Court, the federal First Circuit Court of Appeals and the Fifth Circuit Court of Appeals. Orr also is a professional and court-appointed mediator.
“I am thrilled and thankful to be a part of the great work of Abilene Christian,” said Jim, who will begin to transition out of his law practice into his new role this summer. “I feel deeply connected to ACU because of the university’s significant impact upon me and my family through multiple generations, and in that sense, it feels like I am coming home.”
Orr grew up in Vernon and remembers trips to Abilene to see both sides of his extended family. His mother, Patsy (Etter ’54) Orr, and uncles Don (’55) and Frank (’58) Etter, were Abilene natives. His father, Robert Orr (’52), is the younger brother of Wilson C. “Dub” Orr (’50) and an uncle of Roland Orr (’68).
“Coming to Abilene, especially for holidays, was always special and usually meant making the rounds to see our relatives,” Jim said.
“My relationship with Dub grew out of these family trips to Abilene. And while I was in college at ACU, Dub helped me find part-time employment at E-Z Serve, where he worked. I have always appreciated and admired him,” Jim said of Dub, who served as an influential ACU trustee from 1970-98 and was named Abilene Christian’s Outstanding Alumnus of the Year in 1995.
“There are very few places I have been where someone does not ask about or know Dub, and speak of their respect for him. He is a great encourager, and has a unique ability to connect with people and bring them together. I think this ability emanates his deep love of, and for, others, who are constantly on his mind. Advancing a cause [ACU] that he dearly loved will be very rewarding.”
Jim said it also means a lot to know of his grandfather and grandmother Etter, and their service to Abilene Christian.
“As 1927 graduates of the college, they moved back to Abilene, and the Hill, not long after graduating,” Jim said. “Madge Etter taught English and was the librarian at the Campus School for many years, where my mother attended.”
He inherits the challenge of helping wrap up the $75 million Vision in Action initiative to build three new science buildings and two athletics stadiums on campus.
“My prayer is that our advancement team will build on the solid foundations developed by so many dedicated people to advance the cause of ACU,” Jim said. “The overwhelming generosity and expressions of good will are inspiring and a source of great momentum for us. Ultimately, my hope is that the team’s purpose and service will grow in proportion to the lives touched throughout the world by ACU, its alumni and friends.”
He is married to Elaine (Rainwater ’87) and the couple has two children: Caleb, an ACU freshman, and KayAnn, a high school junior.