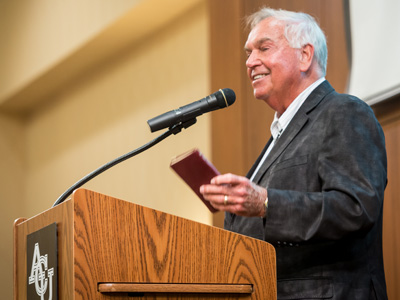 Forging a star-studded career as a player for the New York Yankees in their glory days of the 1950s and ’60s may not have required divine intervention.
But don’t tell that to Bobby Richardson, who continues to lead a life after professional baseball as though his future depended on God’s continuing favor. And it does, as he readily explains to all who will listen.
At a April 29 luncheon sponsored by ACU’s Center for Building Community, the university’s athletics program and the Big Country chapter of Fellowship of Christian Athletes, Richardson shared stories about his faith and his career in Major League Baseball with some of the Bronx Bomber teammates who typified what may be the world’s most recognizable pro sports franchise.
Richardson was a teenager when he watched Gary Cooper’s portrayal of Lou Gehrig in the 1942 classic, The Pride of the Yankees, and wondered what it would be like to wear pinstripes and play in Yankee Stadium. At age 17, he had a pre-game tryout with the team but was reluctant to participate in batting practice until outfielder Mickey Mantle walked up to the cage and put a arm around him and said, “Come on kid, step in there and take some swings.” That began a lifetime friendship between the famous slugger and the young infielder, whose off-the-field lives couldn’t have been more different. Two years later, in 1959, Richardson and Mantle were teammates.
At age 28, Richardson received the Lou Gehrig Memorial Award from Gehrig’s fraternity at Columbia University and at age 31, became only the 10th Yankee to retire with a special day at the ballpark in his honor.


Richardson became the only player from a losing team to be named World Series MVP (1960), played on three World Series champion teams (1958, 1961, 1962), won five Gold Glove Awards (1961-65), was named to the American League All-Star Team seven times (1957, 1959, 1962-66), finished runner up to Mantle as 1962 AL MVP, and played in a still-record 30 consecutive World Series games. He later served for 10 years as president of Baseball Chapel, was head baseball coach at three universities (South Carolina, Liberty and Coastal Carolina), and was narrowly defeated in a Congressional election in South Carolina (1976).
Richardson became Mantle’s spiritual mentor, playing a key role in the Hall of Famer’s decision to become a Christian while he was in the latter stages of a struggle with liver cancer. “We were close friends,” Richardson said of Mantle, who battled alcoholism. “He had some areas of his life he wasn’t willing to give up.” But Mantle eventually did.
While serving as a pallbearer at the funeral of teammate Roger Maris in 1985, Mantle asked Richardson if he would one day officiate at Mickey’s funeral. His friend agreed, and did in August 1995 when Mantle’s memorial service in Dallas was broadcast live to a national audience on two TV networks.
“When the accounts of my life are written,” Richardson says in the conclusion to his 2012 memoir, Impact Player, “I hope two things will be said of me. First, that I played baseball in a way that made my team better. Second, and more important, that I lived my life in a way that drew others to my Savior.”
PREVIOUS POST   NEXT POST
SHARE: