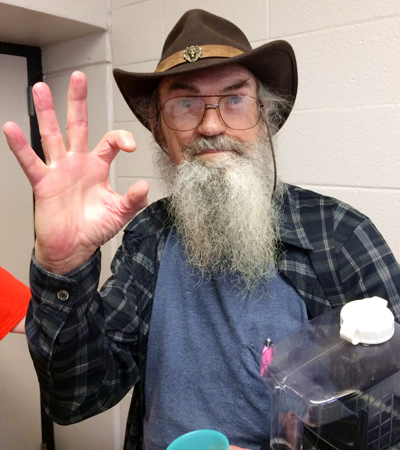 As Silas “Uncle Si” Robertson himself would say, 95 percent of the following is truthful and 5 percent has been added to spice things up. Or who knows? Maybe it’s the other way around. Regardless, here’s what the star of A&E’s hit TV show would be inclined to say about his trip to ACU for Sunday’s “Faith Calls: An Evening With Duck Dynasty” in Moody Coliseum:

“Look. Me and Alan and Lisa went to this Faith Calls deal in Abilene on Sunday. OK? Not Kansas. I’m talkin’ A-Town: Abilene, Texas, Jack. The Lone Star State. Home of J.R. and Dallas, OK? Oil wells and pump jacks, Jack. Bigger than life. Bigger than all get-out. Twenty-five gallon hats. Rattlers everywhere. Fifty-point bucks and 10-foot-tall bullet-proof armadillos, OK? Home of Big Tex, Little Tex, Short Tex, Skinny Tex, Tex-Mex. Hey, there’s Texxes all over Texas, OK? Even in Abilene, where they say women don’t treat you mean. There’s so much sweet tea in Texas that they actually store it in those water towers around town, which is not a commonly known fact, so I brought my own jug, ’cause hey, I’m sugar-free and according to the ladies, sweet enough for three of me, Jack. And they have longhorn steers out there too, OK? Well, I saw one out by the airport and I have to tell ya they look like they’re old enough to vote and kinda scrawny-lookin’ ’cause it probably rains about as often as an election and there’s not much grass to eat to speak of so the brisket is a little on the lean side and you need extra Bar-B-Que sauce to loosen things up, OK? First time I’ve set foot in Abilene. Look, that’s where Abilene Christian University is, OK? Good ol’ A – C – C. I mean, A – C – U. Big coliseum out there on the prairie, kinda looks like a hamburger bun without the meat. Lots and lots of friendly people. We did two shows on ACU’s basketball court, one for students and one for grownups, OK? And let me be frank: I was a little disappointed ’cause they hid the baskets. What’s up with that? Si always stays for the hoops, Jack. Do you know the Globetrotters once called me but it was duck season and I told ’em no. Hey, I’d be playin’ in the NBA and jumpin’ out of the gym if it weren’t for my trick knee. I’d be slammin’ and jammin’ and stuffin’ that ball in yo’ face, even in yo’ momma’s face. Whoosh. Yo’ daddy’s face. Shoop. Yo’ nephew’s face. Yo’ third-cousin’s, sister’s face. Yo’ poodle’s face. Yo’ Chihuahua’s face. Whoosh. It’d be a Si-Slamma-Jamma all night, every night and twice on Sundays. In fact, there’d be nobody eatin’ brisket in Texas because they’d be too busy pickin’ basketballs out of their faces, OK? Anyway, that second show of ours had lots of grownups and lots of kids who stayed up way past some of their bedtimes, OK? But look, that’s OK, ’cause it was good for ’em. Anyway, it was – what do college kids say these days? The bomb. Yep, the bomb, Jack. I’d say “the cat’s pajamas” but no one would know what that means, OK? Except maybe some old folks young enough to know that. And maybe ’cause they have wildcats on every corner in Abilene, they’d probably know a cat’s pajamas if they saw a pair, ’cause cats only wear one kind of pajamas: spotted. Except for the striped ones. Now, if you take a cat’s pajamas, or be so unlucky as to corner one without his pajamas, then it’s Katie bar the door, Jack. Like ’ol Si when he’s backed in a corner, he’ll hurt you bad. He’ll hurt you physically and he’ll hurt you meta-physically. Hey, did I ever tell you about the time I actually became known as the first person to domestiskate a wildcat? It was a 300-pound wildcat, big as a pig, a state record, OK? I have the scars to prove it and that’s a fact, Jack. If a lesser human bean tried to do that, Jack, he’d be down like a rodeo clown. But not Uncle Si. In a flash, it was on like Donkey Kong and that wildcat left there a changed man when I was through with him. And that’s as true a story as there is, like the time I ran so fast my sneakers caught on fire. So hey, we told our best stories to those folks at ACU and Alan showed some slides and Lisa talked about her new book and ’cause it was Sunday, we preached a little, OK? And hey, they told us to bring some of our stuff to sell, but you have to understand that stuff is a very broad term. So we sold some books, OK? Some T-shirts, some iced tea cups, a few keychains, some stink bait, some duck calls, a few crappie rods, drink coasters, random stuff like that, OK? They said the ticket sales benefitted two charities, OK? Abilene Christian Schools and Global Samaritan Resources, OK? And look, I even showed their president, that Doctor Sherbert fella, how to take a Robertson Power Nap. And hey, play hard, nap hard: that’s my motto. You could say I showed ol’ President Shoobie Doobie how to put the Si in siesta. And then he showed me how to make a “W-C” with one hand, minus the vowels, of course, and you have to use your right hand ’cause if you use your left hand it looks like a “C-W” and that could give the wrong massage to people, OK? President Sherbert says they wave that W-C thing a lot in A-Town. And hey, it does take some emmanuel dexterity, which I have plenty to spare, OK? Look, there’s no trick you can’t teach this old fog. You could say a good time was had by all, and that’s a fact, Jack. This is Si Robertson reporting, and I’m tail lights, long-gone, 10-4, over and shout.”

Most of the following video highlights and images of “Faith Calls: An Evening With Duck Dynasty” also are true.