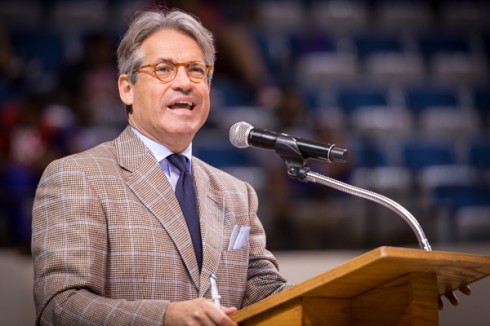 You can count on one hand the best-selling authors who have spoken in daily Chapel at Abilene Christian University, and still have a few fingers left. Those writers who begin by leading the crowd in singing “Amazing Grace” is an even shorter list, and Eric Metaxas is likely at the top by himself.
The author of acclaimed biographies of Dietrich Bonhoeffer and William Wilburforce also displayed some pretty good pipes last Friday, April 11, in leading a soulful version of the timeless hymn that also serves as the title of his account of Wilberforce in Amazing Grace: William Wilberforce and the Heroic Campaign to End Slavery, a companion to the 2006 film of the same name.
“You guys are pretty good,” he admitted afterward, complimenting the faculty, staff and students who followed his a cappella lead. “I really sense a spirit among you.”
Metaxas spoke later at a luncheon sponsored by the ACU Center for Building Community, using the opportunity to explain how he sees Americans’religious freedoms being threatened by new legislation and government-mandated programs such as the Affordable Care Act. 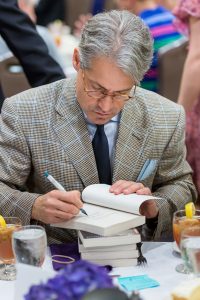 Bonhoeffer: Pastor, Martyr, Prophet, Spy is a hefty 608-page book about the German-born Lutheran theologian who stood and spoke up to criticize Adolf Hitler in his homeland, and lost his life as a result. It reached No. 1 on the The New York Times’ best-seller list in 2010.
“Because he took the Bible seriously, he changed the world,” Metaxas said of Bonhoeffer, who was executed in 1945, two weeks before allied forces liberated the Nazi concentration camp where he was imprisoned. “We need to know more about these Christian heroes.”

Metaxas used his Chapel presentation to tell his faith story, which included growing up as the son of immigrants and regularly attending the Greek Orthodox church but “never having the gospel communicated to me. We were just ‘religious’,” he said. By the time he graduated from Yale University and moved back in with his parents – an experience he didn’t recommend to students – Metaxas admitted to being adrift in his life and faith, unsure of what he believed. A co-worker at Union Carbide led him to Christ. A friend introduced him to Bonhoeffer’s classic book from 1937, The Cost of Discipleship, and he was hooked on New Testament Christianity.
“The world is not like this place,” he said in complimenting ACU, yet describing it to college-age students, whom he encouraged to make sure they go through the trials of their lives after graduation with Jesus alongside them. “Jesus is alive and overnight he changed my life.”