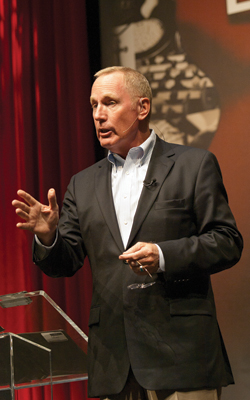 Max Lucado (’77) will soon become the fourth Abilene Christian University graduate to be added to the Texas Intercollegiate Press Association (TIPA) Hall of Fame, joining an esteemed group of journalists and media pioneers with higher education roots in the Lone Star state.
Lucado, a former writer on The Optimist newspaper in the late 1970s at ACU, will be inducted at the organization’s 2014 conference April 10-12 in San Antonio. The minister of preaching at Oak Hills Church in San Antonio, he is a best-selling Christian author of 30 books that have sold more than 82 million copies while inspiring readers to lives of faith. He was ACU’s Outstanding Alumnus of the Year for 2003.
TIPA is the nation’s oldest student press association and its Hall of Fame recognizes career achievement including the fields of journalism, journalism education and student media.
“Basic journalism training in writing has been such a great benefit – creating strong leads, being concise. As I look back, that was of great benefit to me. Other disciplines in theology and English encourage people to be more expansive,” Lucado said. “If I hadn’t been called to missions and ministry, I could have seen myself as a journalist.”
Lucado’s honor will be accepted on his behalf by Dr. Cheryl Mann Bacon (’76), professor and chair of JMC at ACU, as he will be traveling in the Holy Land.
Others with ACU backgrounds in the Hall of Fame are Dr. Charles Marler (’55), David Leeson (’78) and Jody Dean (’82). Marler is professor emeritus of journalism and mass communication who was a longtime department chair and advisor of The Optimist. Leeson won the 2004 Pulitzer Prize for breaking news coverage of the invasion of Iraq for The Dallas Morning News. Dean is an award-winning radio host in Dallas.
Previous TIPA Hall of Fame inductees and their Texas alma maters include Walter Cronkite (Texas-Austin), Dan Rather (Sam Houston State), Bob Schieffer (TCU) and Scott Pelley (Texas Tech) of CBS News; Sam Donaldson (Texas-El Paso) of ABC News; Jim Lehrer (Victoria) and Bill Moyers (Texas-Austin) of PBS; and President Lyndon B. Johnson (Texas State) and his wife, Claudia “Lady Bird” Johnson (Texas-Austin).