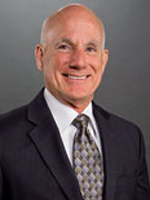 For the third time in its history, Pepperdine University today named a scholar with an Abilene Christian University background to be its chief academic officer.
Dr. Rick Marrs (’73), dean of Pepperdine’s Seaver College since 2008, was named to succeed former ACU faculty member Dr. Daryl Tippens as provost, effective Aug. 1. Veteran administrator Dr. William Adrian (’59) was Pepperdine’s provost from 1983-96 and provost emeritus the last 18 years.
Marrs has been a member of Pepperdine’s Religion Division faculty since 1987, including tenure as the Blanche E. Seaver Professor of Religion from 2001-06. An Old Testament scholar, his academic expertise includes the literature of the ancient Near East and study of the Dead Sea Scrolls, with Hebrew, Aramaic, Syriac, Phoenician and Ugaritic language skills.
After 13 years at Pepperdine, Tippens retired as provost to return to ACU this fall as University Distinguished Scholar of Faith, Learning and Literature. His new role will combine his talents as a teacher, writer, researcher and scholar in an advisory role to ACU administrators. Before heading to Pepperdine, Tippens taught at ACU from 1987-2000 as the James W. Culp Distinguished Professor of English.