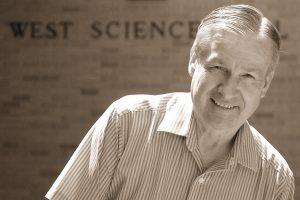 A memorial service will be held at 2:30 p.m. Saturday for professor emeritus of chemistry Dr. Alvie Lee Davis (’55), one of Abilene Christian University’s longest-tenured professors and the namesake of its biochemistry research lab. He died March 20 at age 83 after a struggle with cancer.
His service will be at the University Church of Christ, where he was a longtime member. Visitation will be today from 6-8 p.m. at Elmwood Funeral Home (750 Hwy. 277 South).
Davis was born Jan. 22, 1931, to a dry-land cotton farming family in Richardson, Texas, and married Jana Showalter (’64) in 1961.
Classes taught at ACU by Dr. Floyd Dunn (’44) convinced Davis to change his major from agriculture to chemistry, and he went on to earn a doctorate in the subject in 1960 from The University of Texas. As an ACU faculty member, he taught all but one of the full-time professors on the faculty of today’s Department of Chemistry and Biochemistry, including Dr. Eric Hardegree (’80), Dr. Perry Reeeves (’65), Dr. Kim Pamplin (’91), Dr. Bruce Hopkins (’80), Dr. Greg Powell (’80) and his wife, Dr. Cynthia (Barton ’81) Powell, Dr. Brian Cavitt (’98) and Dr. Sarah (Moore ’05) Lee.
Davis joined the ACU faculty in 1959, retired after 42 years of full-time teaching in 2001 but taught classes part time until 2009 – 50 years in all. Colleagues remember him as quiet, selfless scholar with a near-encyclopedic memory who studied chemistry textbooks in his spare time simply to discover errors. His office door was always open, often at late hours, to students who needed extra instruction or counsel.
Teaming with the late Dr. Tommy McCord (’54), the two partnered for almost 30 years on research funded by the Robert A. Welch Foundation. Their work included efforts to synthesize new amino acids such as lysine and phenylalanine, two of the building blocks of human protein. In 1965, they received a research grant of $45,000, at the time the largest ever received by ACU professors. Davis served on projects for the National Science Foundation, wrote and presented dozens of scholarly papers, and helped the department earn its first accreditation by the American Chemical Society  in 1971.
Among survivors are his wife of 52 years, Jana; two sons, Jeffrey S. Davis (’90) and Jay Davis (’06); a daughter, Dr. Lisa (Davis ’94) Dudley; six grandchildren; and three brothers, John Caleb Davis Jr. (’54), John Wesley Davis (’56) and Oliver Leamon Davis.