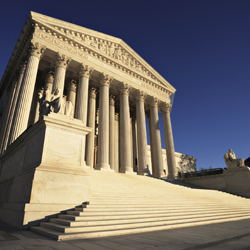 Abilene Christian University political science alumna Lori Windham (’01) is on a legal team today at the U.S. Supreme Court in Washington, D.C., where her firm is representing Hobby Lobby Stores Inc. in a historic case challenging the Affordable Care Act’s contraception mandate.
Windham – who earned her law degree from Harvard in 2005 – is senior counsel for The Becket Fund for Religious Liberty, which is representing the David and Barbara Green family of Oklahoma City in Sebelius v. Hobby Lobby Stores Inc. The Greens are being assisted by the Washington-based civil rights law firm that focuses on defending the free expression of religion against government interference.
David Green is CEO and founder of Hobby Lobby, and his son, Steve, is president. The arts and crafts retailer has 602 stores in 41 states. Kathleen Sebelius is secretary of the U.S. Department of Health and Human Services.
“While the Green family has no moral objection to providing 16 of the 20 FDA-approved drugs and devices that are part of the federal mandate, providing drugs or devices that have the potential to terminate a life conflicts with their faith,” according to The Becket Fund’s summary of the case.
The Greens initially filed suit in 2012, and in June 2013, the U.S. 10th Circuit Court of Appeals upheld the religious right of a family business to conduct business in a way consistent with their religious beliefs. In July 2013, a preliminary injunction was granted by a federal court, upholding the appeals court ruling. Last fall, the federal government asked the Supreme Court to review the case. Oral arguments are being heard this morning, with a ruling expected in June.
Watch this blog for further coverage of Windham’s role in the case.