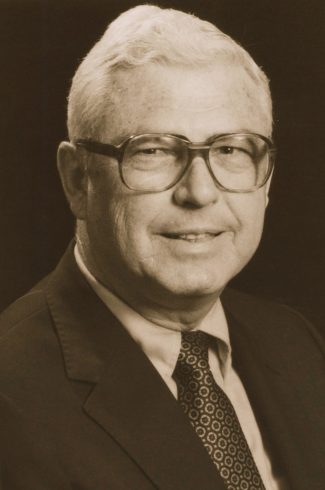 Dr. Clyde Neal Austin (’53), the Robert and Mary Ann Hall Chair and professor emeritus of psychology at Abilene Christian University, died March 7, 2014, in Abilene following an illness. The renowned expert on the study of cross-cultural re-entry was 82 years old.
A memorial service will be held April 5, 2014, at 2 p.m. in Abilene’s University Church of Christ, where Austin served as a member, deacon and elder.
He was born Dec. 5, 1931, in Karnes City, Texas, and married Sheila Ann Hunter (’53) on July 20, 1951, in her hometown of Dodge City, Kan.
After graduating in 1953 from ACU – where he was president of the Students’ Association, played in the Wildcat Band and on the golf team – he was a biology, science and history teacher in 1954-55 at North East High School in San Antonio, and preached for the Copperas Cove Church of Christ.
Following a Korean War assignment in the Army in 1955-56, Austin became an instructor of psychology at Abilene Christian and later, director of placement (1957-59) and director of admissions and placement (1961-69), before being named assistant professor of psychology in 1969. Other than an 18-month leave of absence in 1970-71 as a vocational missionary at American Community School in Buenos Aires, Argentina, and another to work on his doctorate, his career at his alma mater spanned 41 years. He also was an adjunct professor at Eastern Washington University.
Austin earned a Master of Personnel Service degree from the University of Colorado at Boulder and a Ph.D. in industrial psychology from the University of Houston. He did post-doctoral studies in family therapy at Hahnemann Medical College and the Eastern Pennsylvania Psychiatric Institute, and in gerontology at the University of Southern California, and was a licensed psychologist and counselor, and certified marriage and family therapist.
He held the first professorship in the Robert and Mary Ann Hall Chair of Psychology and Intercultural Studies at ACU. The chair was founded in 1995 to enhance understanding of the special psychological dimensions of foreign service, especially missions work.
“While he was an excellent psychologist and classroom teacher, Clyde was always a missionary at heart,” said ACU chancellor Dr. Royce Money (’64). “He was a humble and talented servant of the Lord whose reach went far beyond his presence.”


“Clyde was especially helpful to me as I was doing my research on missions teams,” said Dr. Sonny Guild (’69 M.Div.), assistant professor of Bible, missions and ministry, and associate director of ACU’s Halbert Institute for Missions. “He welcomed me for days as I sat in his office mining the gold out of his files. He was so very generous and willing to share his resources with others for the benefit of missionaries and the Kingdom. Missions and especially missionary care made great strides forward because of his work. He will be greatly missed.”
Dr. Chris Flanders (’89), associate professor of missions in the Graduate School of Theology and director of the Halbert Institute for Missions, recalled the thoughtfulness and hospitality of the Austins, who identified closely with missionaries and their families because of their own experience living outside the U.S. “When Clyde and Sheila did a seminar for the parents of the members of my church-planting team that went to Chiang Mai, Thailand, he made it a point to send a hand-written letter expressing hope and encouragement to each of the parents whose children were about to move half way around the world,” Flanders said. “It made a great impression on my parents.”
Austin’s research and frequent publications focused on culture shock and re-entry, including two books, Cross-CulturalRe-entry: An Annotated Bibliography, and Cross-Cultural Re-entry: A Book of Readings. He served as a consultant and conducted pre-field psychological assessments for more than 400 missionary candidates on six continents. Austin chaired the 1989 International Conference on Missionary Kids, a workshop in Nairobi, Kenya, with more than 800 delegates from 61 nations.
He served as contributing editor of the Journal of Psychology and Theology from 1989-91 and was a delegate to the State of Texas White House Conference on Aging. He was named outstanding professor in ACU’s College of Natural and Applied Sciences for 1983-84.
Among survivors are his wife of 62 years, Sheila; a son, Steve Austin (’84); daughters Jan Austin-Scott (’76), Marcia (Austin ’78) Moore and Joanna (Austin ’82) Rose; and eight grandchildren.
PREVIOUS POST   NEXT POST
SHARE: