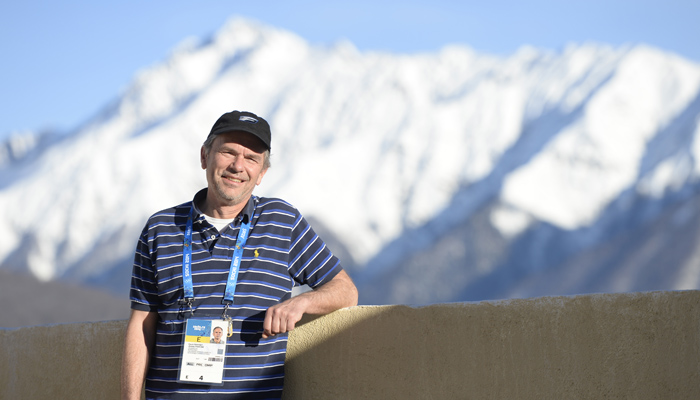 The latest most Excellent Adventure of David Ramsey (’81) will end Feb. 23 when the XXII Olympic Winter Games conclude. An award-winning sportswriter for The Gazette newspaper in Colorado Springs, Colo., he is covering his fourth Olympic Games, this time in Sochi, Russia. He writes about professional and collegiate sports in and around Colorado Springs, the home of the U.S. Olympic Committee and the Olympic Training Center, and for ACU Today magazine when he can. You can follow his daily coverage here.

Photos of Ramsey from Sochi are courtesy of veteran photographer Mark Reis, whose coverage can be seen here, including a video of him explaining how he befriends people at Olympic venues, smoothing the way for him to do his job.

What was involved in traveling from your home in Colorado Springs to Russia?

The journey to Sochi was the wildest of my career. I woke up on Monday, Feb. 3, in New York City after covering the Denver Broncos in the Super Bowl and had to return to Denver by Tuesday morning to begin my journey to Russia. One problem: It snowed 10 inches in New York. Two of my flights were cancelled, forcing me to take a train to Baltimore to catch a flight to Denver. I arrived in Denver at 8 p.m. Monday night after a full day of travel and awoke at 6 a.m. the next morning to start 17 hours of air travel to Sochi.

What’s involved in getting around Sochi and to the various competition venues?

I rode a gondola on the final segment of my epic trip from a hotel room in Manhattan to a hotel room in Sochi. It’s the only way to arrive at the Panorama Hotel, which deserves the name. I sit in that gondola at least twice a day, and the ride never fails to dazzle me. On a few late nights/early mornings last week, I was sitting in that gondola at 2 a.m. after a long day of work while looking out at the mountains glowing in strong moonlight. An inspiring view.
Buses carry us to competition. I spend a lot of time on buses. It’s a two-hour journey, via gondola and bus, from my hotel in the mountains to the skating and hockey and other events at the Olympic Park on the edge of the Black Sea. I’m sitting on a bus while typing these words. It’s 1:52 a.m., and I’m about halfway home.

Hotel accommodations in Sochi have made headlines for not being up to par. What is yours like, and what does it lack?

I’m a little embarrassed by my hotel. On my other three Olympic trips (Athens, Beijing and London) my rooms were basic, similar to dorm rooms. And I am a dorm expert after living in college dorms for seven of my eight semesters. The room in Sochi is plush and the hotel features an outrageously beautiful Olympic-length pool along with a full Euro-style sauna. Not all of my sportswriter friends have been so lucky, and I’ve tried to keep my magnificent hotel and room a secret.

Describe the view outside your hotel window.

One complaint: Did not get one of the full-view rooms at the Panorama, but this probably is a good thing. Much of my writing is done in the room, which boasts a blazingly fast Internet connection. If blessed with a view room, I would spend all my time staring out the window at those mountains. I can see the mountains out of a corner of the window, but have to work at it.

What are the security issues you face each day, and how do you weigh the potential risk with doing your job as a journalist?

Those Chechen rebels/terrorists are a terrifying gang, and I’ll freely admit fear followed me around for a couple months before arriving in Sochi. But once I arrived here, the fear lessened. The feel here is comfortable, and in many ways the Sochi area reminds me of Southern California. I go through multiple security checks each day and get patted down frequently and thoroughly. (This is one of those good news, bad news kind of things.) I don’t feel totally safe. I do feel mostly safe. 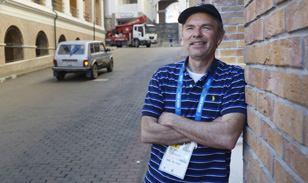 Are you consuming food and water with caution, or doing as you please?

Water out of the tap is unpredictable, and I don’t drink it. The food has been fine. My trip to Beijing for the 2008 Olympics was the dining highlight of my life with tremendous French, Vietnamese and Spanish food. (No tremendous Chinese food, strangely enough.) Sochi reminds me of the Athens trip in 2004. Almost every restaurant offers the same menu. Haven’t endured a bad meal in Sochi. Haven’t celebrated a great meal, either.

How would you describe the Opening Ceremonies experience?

Let me offer a confession: I do not enjoy the Opening Ceremonies of any Olympics. Watching Danny Boyle’s mega-bizarro ceremony at the 2012 London Games remains four of the longest hours of my entire life. The Olympics are full of authentic drama and heart-gripping surprise. I feel blessed to have covered four Olympics, but consider myself a survivor of the Opening Ceremonies. Had a good seat, with a strong view of stone-faced Vladimir Putin, and was happy with the column I wrote after the Opening Ceremony. Still, those three or so hours will rank as the most excruciating of these Games.

Which competitions will you be covering, and how do you determine what to write for The Gazette while covering such a complex event?

I am covering just about everything as the lone reporter from The Gazette. I will write about snowboarding and hockey and figure skating and bobsledding and Alpine skiing and X-Games style snowboarding and skiing, and that’s just a partial list. This keeps me busy, and the travel to and from venues can make for a long day. Last night I climbed into bed thinking it had been an easy day, but soon realized it had been a 12-hour day. It still had been my easiest day of these Games. Not complaining. Can sleep when I return home.

Our coverage decisions are a group effort; I am covering these Games with photographer Mark Reis, and this is his eighth Olympic journey. He offers sound advice. At any Olympics, there are times when I’m sitting in a venue while wishing I was sitting in a different venue, but this frustration isn’t the norm. What I want to do is usually what my bosses want me to do, too. I plan to be, for instance, at the gold-medal hockey games, both men’s and women’s.

How does Sochi compare to the other Olympic venues you’ve experienced?

If smarter, I would have been an architect. The Olympic parks at Athens and Beijing were spectacular, and staggeringly expensive. I doubt future Olympic parks ever will match those historically gorgeous efforts by the Greeks and the Chinese. Sochi’s Olympic park reminds me of the park in London: Impressive, but nothing close to Athens and Beijing. The mountain venues in Sochi are stunning, no doubt about that. I watch competitions while surrounded by snow-peaked mountains. They are absolutely beautiful.

What has surprised you most – in a good way – thus far?

I have been happily surprised by the feeling of safety. When the rebels/terrorists blew up those buses and killed those three dozen innocents, it shook me up. My heart mourned for the victims, but my heart also trembled for the dozens of friends who would join me in Sochi. Peace has replaced the fear. I wake up each morning and look out the corner of my window and see the mountains and can barely wait to start my workday. It’s a blessing to be here, doing what I do. Truly, it is a blessing.